A few hundred people gathered near the Lincoln Memorial with signs and flags to exercise their First Amendment rights; one in support of free speech, the other just steps away to rally against hate speech.
Listen now to WTOP News WTOP.com | Alexa | Google Home | WTOP App | 103.5 FM
(1/5) 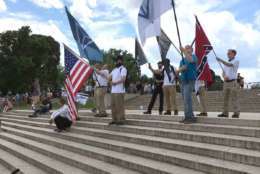 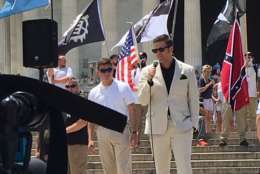 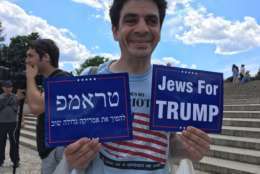 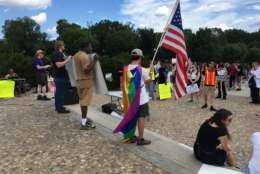 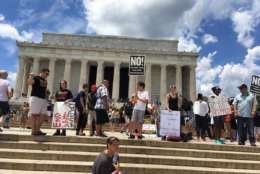 WASHINGTON — At the National Mall Sunday afternoon, a few hundred people gathered with signs and flags to exercise their First Amendment rights.

Both rally groups gathered near the Lincoln Memorial; one in support of free speech, the other just steps away to rally against hate speech.

“We’re not going to be replaced,” one speaker told the audience gathered near the reflecting pool for the free speech rally. “This was our country, the founding fathers objectively founded this country for white people.”

There were a variety of ideological representations at the gathering including Ariel Kohane, who held “Jews for Trump” signs. Kohane said he traveled from Manhattan’s Upper West Side for the rally.

“I definitely think that the left is trying to smother free speech. We on the right definitely promote it,” Kohane told WTOP.

At the counter rally staged by D.C. Unite Against Hate, attendees said they felt it necessary to also make their voices heard.

“The U.S. is very progressive as of right now. I think we’re moving in the right direction. But of course there are some people who just are living in the past,” said Rose, who is from D.C. but now lives in Rockville, Maryland.

“I think we have to come out when the far right is demonstrating and the racist white supremacists are out here,” said John van Kamp of Arlington, Virginia.

But everyone at the free speech rally didn’t agree with everything they heard.

“I think that shows I stand up 100 percent for freedom of speech,” said Irma Hinojosa, a rally speaker who says she’s taken lots of flack because she is a Donald Trump supporter.

Others gave a listening ear at that rally, not to show their support for all the rhetoric, but “to understand other points of view and try and see what people are concerned about and what their grievances are with other political parties and ideologies,” said William, a student studying government at Georgetown University.

“Now that Trump is in office, lots of people have been given license to do and say things that they wouldn’t have said before. Things that weren’t previously (socially) acceptable have become socially acceptable,” said Daniels. “Because of that, I think it’s important to have counter protests in order to demonstrate that Black lives matter, that women matter, that all people matter.”