WASHINGTON — The smell of barbecue wafted through the air on Pennsylvania Avenue Saturday. But at the 25th-annual Giant National Capital Barbecue, hot dogs were the main attraction for some competitive eaters qualifying for the annual Coney Island hot dog eating contest.

Richard Shea, president of Major League Eating said this is the fourth year the qualifier has come to D.C.

“It’s good that here at the Capital we’ll finally get down to business and we’ll champion the spirit of America and inclusion,” Shea said.

Among the 10 participants who came to the D.C. qualifier from across the country, Nathan Oji was named the men’s champion, consuming 37 hot dogs. At last year’s qualifier, he ate 33. He hopes to eat around 50 hot dogs for the big Coney Island event.

Juliet Lee was the women’s champion, consuming 28 hot dogs. She is also hopeful she can eat a lot more at the final in New York.

John Anderson, who lives in Navy Yard, was the only local competitor. It was his first time eating competitively, and he only found out about the D.C. qualifier about a month ago.

“I was talking to some buddies and made the bold claim I could eat 20 hot dogs,” said Anderson. “The only way to really prove it is a contest like this because nobody really wants to pay for 20 hot dogs,” Anderson said.

He finished 7 ½ hot dogs and finished second to last.

The league hosts 15 qualifiers throughout the nation, but they expanded them to 19 this year in various parts of the country.

Shea said that for those who missed out at the D.C. qualifier, there may still be an opportunity to try to qualify for the main Coney Island event in Naperville, Illinois, outside of Chicago.

He said he’s looking forward to the main event, which dates back to 1916 when four immigrants held a hot dog eating contest to see who was the most patriotic.

“There’s nothing more patriotic than Nathan’s Famous on the Fourth of July,” Shea said. 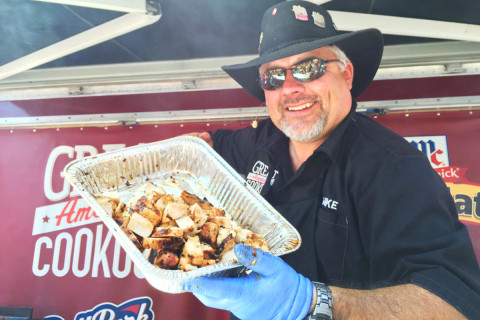