WASHINGTON — As John Rowley stepped onto the Gallery Place platform, his concerns were routine for a Friday evening: finding his friend and having enough money on his fare card to exit the Metro station.

But in a matter of seconds, he had a much more urgent concern: not being pushed against a moving train.

The 62-year-old Northern Virginia resident told WTOP how he was the victim of an apparently random beating on a crowded platform, one that he thinks was caused by people out “for a good time.” 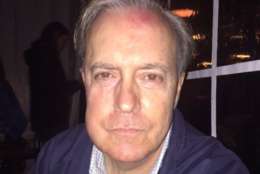 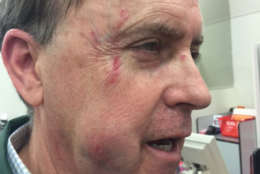 It all began, he said, as he was exiting the train. Someone put their shoulder into his chest in an attempt to knock him down, he remembered.

“I took a step toward him, as if to say, ‘What are you doing?’” he said. “And at that point, I believe others jumped on top of me,” and the punches began.

Rowley thinks as many as five attackers were involved.

The train he had exited was moving again, he said, and the attackers pushed him toward it. “To prevent my body from hitting the train, I reached up with my hand, and I broke my hand,” he said.

Why does he think it happened?

“These guys were out for a good time.”

In addition to the broken hand and a cut finger, he suffered severe bruising to the face and head from all the punches.

His injuries could have been worse were it not for a George Washington University Law School student who stepped in to defend him.

Rowley’s daughter, Suzanne Ferguson, is grateful for that.

“He saw an older gentleman that needed help, and he just wasn’t going to stand by and record it or just watch,” she said.

Both Rowley and Ferguson are letting it be known: They want to thank this man in person. “I know that took a lot of courage and bravery to do what he did,” Ferguson said.

Metro police, Rowley said, were terrific but “nowhere to be seen” when the assault was occurring.

Detectives later told him that two juveniles have been arrested in the attack.

“People who ride the Metro shouldn’t be concerned about their safety,” he said.

Editor’s note: A previous version of this story had specified John Rowley’s place of residence, which has now been removed.