What will February warmth do to cherry blossoms?

“I think most horticulturists are saying, ‘Oh, no!’ Whereas hopefully, we can take some time to say, ‘Oh, wow!’” said Margaret Pooler, director of research at the U.S. National Arboretum.

The “oh wow” factor is easy enough to understand — people typically winter-weary by February are instead enjoying springtime beauty.

The concern is over potential consequences of an accelerated growth pattern this early in the season.
Freezing temperatures, for example, can wipe out a year’s worth of flowers on ornamental cherry trees, which display their short-term glory for only 7 to 10 days a year anyway.

Worse still is if nearly forming leaves take a hit.

“That could be trouble for the resources of the plant, because they’re going to have to expend more, and that’s going to make them weak for the rest of the season and maybe more susceptible to biotic and abiotic stresses,” Pooler said. 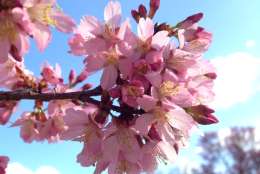 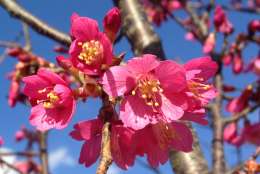 Higher and lower temperature swings could help extend the length of the blooming season, however, by magnifying natural tree cycles of flowering in the early, middle or later part of the season.

“Instead of being a big one-time shot in your face with everything blooming at once,” Pooler said.

Tight buds beginning to form now should survive any cold snap, Pooler expected, as long as temperatures don’t get into the 20s.

As for D.C.’s iconic cherry trees along the Tidal Basin, the National Park Service will make its prediction for peak bloom on March 1.

Over the past 13 years, peak bloom has occurred between March 20 and April 10.