Two D.C. police officers and a male suspect have been shot in Northeast on Thursday night. The suspect has died, and the officers are in stable condition.
Listen now to WTOP News WTOP.com | Alexa | Google Home | WTOP App | 103.5 FM

WASHINGTON — Two D.C. police officers were expected to leave the hospital after they were injured in a violent confrontation involving gunfire that left a man dead Thursday night.

The officers, who were in uniform and on duty, were both shot in the lower part of the body, according to police. They were expected to be released on Friday.

It happened in the District’s Trinidad neighborhood near Bladensburg Road around 10:40 p.m.

“Both officers are in good condition and are expected to be released today,” said Gregg Pemberton, the police union’s treasurer. “They both were in good spirits.”

Investigators said that the two officers were dispatched to the area in response to a report that shots had been fired earlier in the day.

At some point, there was a struggle and gunfire was exchanged with the man, whose name has not been released. But the details of exactly what transpired were unclear.

“The two best witnesses that we know of right now are the two officers,” said the District’s acting police Chief Peter Newsham.

The man was shot during the confrontation and was pronounced dead at the hospital.

“We do have a weapon recovered from the scene, which we believe to be the suspect’s,” Newsham said.

Police also have not released the names of the two injured officers.

In a show of support for the officers Thursday night, both Newsham and Mayor Muriel Bowser joined them at the hospital.

“A lot of us became very concerned,” said Pemberton. “It’s kind of a situation that makes the hair stand up on the back of your neck.”

“After speaking with the officers, there was a collective sigh of relief from everybody,” he said.

The shooting unfolded just hours after Bowser announced that Newsham was her choice to lead the D.C. police force permanently. Newsham has been serving as the acting police chief since former Chief Cathy Lanier stepped down in September.

The scene of the shooting: 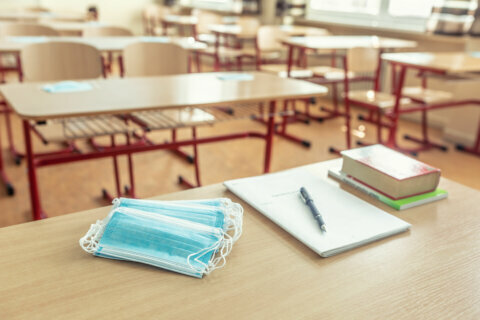