Storefronts on one building on I St NW near New Hampshire Avenue were boarded up Monday. A Starbucks was closed for the day and repair crews could be seen working on one of the shattered windows.

Authorities say 230 people arrested during the disturbances have appeared in court and were charged with felony rioting.

Felony rioting is punishable by a maximum of 10 years in prison and a fine of up to $25,000, according to a spokesman with the U.S. attorney’s office.

One 31-year-old man from Florida, Dane Powell, was arrested and charged with assault on a police officer while armed. D.C. police said Powell threw a rock at officers near 12th and K streets NW as he participated in the riots. Powell initially escaped from the scene, but investigators later learned who he was and took him into custody a day later, police said.

In addition to the riot suspects, a 21-year-old college student was arrested and charged with aiming a laser pointer at an aircraft. George Herdeg, from Texas, is accused of aiming the device at a U.S. Park Police helicopter Friday.

He was released and ordered to report to court Monday afternoon, the U.S. attorney’s office said.

“We’re working the damage assessments now throughout the city, and I’m sure we’ll be doing that throughout the week,” said Chris Geldart, director of D.C. Homeland Security and Emergency Management, who offered praise for the actions of D.C. police.

“I think that the swift response of the Metropolitan Police Department kept this from being more of what it was,” Geldart said.

“They only used force when necessary to control aggressive crowds. They allowed for peaceful demonstrations throughout the city,” Newsham said.

Some protesters have complained that police corralled and arrested them even though they were not taking part in any rioting.

“I did not have any concerns that I have seen to this point with the way the rioters were handled,” Newsham said, “I always welcome criticism of the police because it makes us better,” he said. 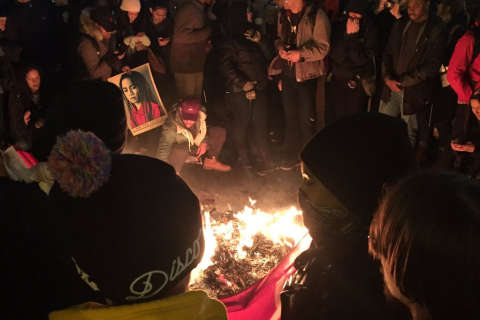 DC police prepared for inauguration protesters through the night