After a gun scare spurred by a fake news conspiracy this weekend at the Comet Ping Pong pizzeria in Northwest D.C., the community is rallying around the restaurant, leaving supportive messages and launching a social media campaign.
Listen now to WTOP News WTOP.com | Alexa | Google Home | WTOP App | 103.5 FM
(1/4) 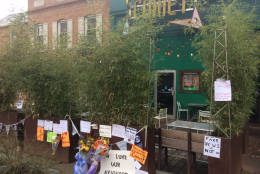 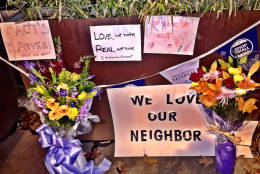 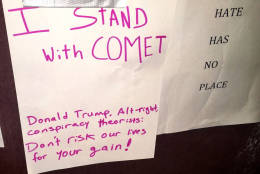 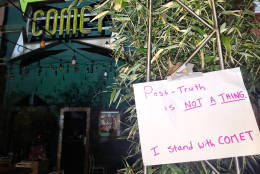 WASHINGTON — A popular D.C. pizzeria was set to reopen Tuesday afternoon after a gun scare over the weekend that was inspired by a fake story online.

Comet Ping Pong at the corner of Connecticut and Nebraska avenues in Northwest D.C. has been closed since Sunday’s incident, when police say a 28-year-old North Carolina man walked in carrying an AR-15 assault rifle, pointed it at an employee and fired shots inside the restaurant.

Edgar Welch was charged with several weapons-related counts, including assault with a dangerous weapon, and was ordered held without bond. He told police he went to Comet to investigate a wild conspiracy theory that spread during the presidential election, claiming the business is a front for a child sex ring run by Hillary Clinton.

He told police he decided to peacefully surrender to authorities “when he found no evidence that underage children were being harbored in the restaurant,” charging documents presented in court stated. No one was injured during the incident.

During rainy, gloomy weather Tuesday morning there were bright, colorful flowers placed outside Comet, along with signs that read “I stand with Comet” and “We love our neighbor.”

Supporters of the business have also launched a social media campaign called #StandWithComet.

“No doubt this awful event and the malicious mistruths spread beforehand have left the staff feeling unsafe and on edge,” reads a message on the campaign’s Facebook page. “They need a little light in all this darkness.”

Organizers are urging people to visit the restaurant on Friday, eat pizza, tip well and thank the staff. So far, more than 1,000 Facebook users have RSVP’d for the event.

Other businesses in the area said they have also received threatening phone calls in recent weeks related to the online conspiracy theories. Bradley Graham, a co-owner of Politics and Prose, an independent book store near the pizzeria, told The Associated Press police seemed uninterested in investigating the threats seriously until Sunday’s shooting.