Days after a 16-year-old girl was gunned down in her neighborhood, a man D.C. police say is key to solving her killing has turned himself in, a source told WTOP's news partner, NBC Washington.
Listen now to WTOP News WTOP.com | Alexa | Google Home | WTOP App | 103.5 FM

WASHINGTON — Days after a 16-year-old girl was gunned down in her neighborhood, a man D.C. police say is key to solving her killing was arrested on a weapons charge after turning himself in.

D.C. Police Chief Peter Newsham confirmed to WTOP that Saeve Evans is under arrest for unlawful possession of a firearm. He is not charged in the death of 16-year-old Breyona McMillian, who was killed the day after Thanksgiving.

Saeve Evans turned himself in at the Fifth District Police Station, Tuesday night.

Earlier Tuesday,  Newsham named the 30-year-old convicted felon as the key to solving the case in a news conference.

Investigators have said McMillian was not the target, but was shot multiple times in her neighborhood the day after Thanksgiving.

Surveillance video shows Evans firing a gun multiple times into the area where McMillian was shot in the Potomac Gardens neighborhood on I Street in Southeast D.C. Investigators won’t say the bullets Evans fired were those that killed McMillian, but believe Evans has details that will help them close the case.

“It was almost noon on a relatively nice day. There were a number of people out there and Saeve Evans discharged a firearm under those circumstances. In my opinion, it’s absolutely reckless,” Newsham said.

The community has provided tips to homicide detectives that Newsham said have helped them further the investigation. There’s a $10,000 reward for the tip that leads to Evans’ arrest and conviction. Evans is facing an unlawful possession of a firearm charge.

McMillian’s friends and family mourned the girl in a vigil following her death. 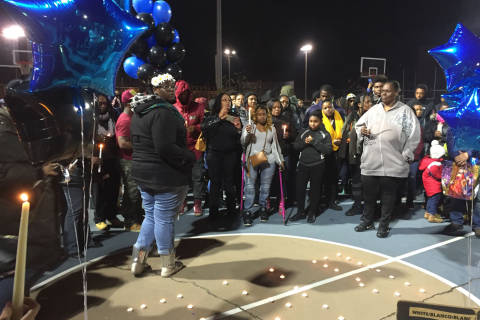