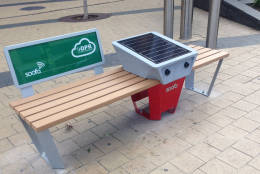 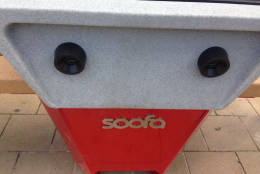 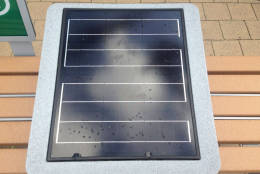 WASHINGTON — When is a city park bench more than just a place to put your feet up on a nice fall day? When it comes outfitted with free Wi-Fi and charging ports that can juice up your smartphone.

The D.C. Department of Parks and Recreation has installed a solar-powered “Soofa” bench in Columbia Heights and plans to install another high-tech bench near the Eastern Market Metro station in the next week, DPR Director Keith Anderson told WTOP.

The benches are part of a six-month-long pilot project. If enough residents use the new benches — and they survive cold winter temperatures and potential vandals — then additional benches may pop up in more of D.C.’s 375 public parks and spaces, Anderson said.

“We were looking for creative and innovative ways to bring Wi-Fi to our parks,” Anderson said. “This is a way that I could do it without there being a very heavy lift in terms of building the infrastructure for the Wi-Fi. The bench comes Wi-Fi-enabled. It runs on solar power. And then all you have to do is nail it to the ground, basically.”

The wooden and red-steel benches seat three and are outfitted with a mini solar panel and two USB charging ports.

The benches are manufactured by Boston-based Soofa company, which is part of a growing trend in “smart cities”– the term used to describe connecting city services and infrastructure to the internet.

The company’s benches were first unveiled in Boston in 2014. The company says over 50 U.S. cities have installed the devices.

The benches can also be outfitted with sensors to track air quality, noise levels and pedestrian activity, but Anderson said the D.C. benches are not currently equipped with those features.

“For now, the goal was to bring Wi-Fi to our parks and give our residents a chance to charge their phones on the go,” he said.

The first bench was installed this week at Columbia Heights Civic Plaza on 14th and Park Road in Northwest D.C. Park officials plan to install another bench on 8th and Pennsylvania Avenue in Southeast in the next week.

“In order to bring Wi-Fi to a park, that is a very reasonable price,” he said. “I didn’t have to run any wires. I didn’t have to buy any special equipment. The bench comes literally shovel-ready.”

Anderson said he hopes city residents and visitors get a chance to test out the devices.

“I want to make sure that we’re making a wise investment and making sure that there’s a benefit to the community by enabling folks to have Wi-Fi in and around their parks,” he said. “So we want folks to test them out and let us know what they think.”