Shell shocked from last winter, D.C. leaders are getting ahead of the season, preparing for how to better plow the streets and predict storms like the one that stranded drivers for hours last January.
Listen now to WTOP News WTOP.com | Alexa | Google Home | WTOP App | 103.5 FM
(1/3) 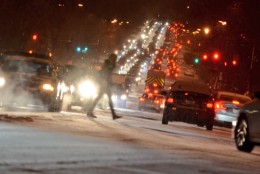 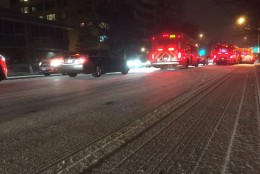 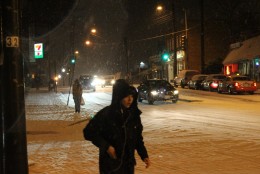 WASHINGTON — Shell shocked from last winter, D.C. leaders are getting ahead of the season, preparing for how to better plow the streets and predict storms like the one that stranded drivers for hours last January.

While tracking plows is not a new technology in the city, the purchase of a new mobile tracking system will vastly improve residents’ ability to know when their street will be cleared, said Department of Public Works Director Christopher Shorter.

It’s one of the changes for D.C.’s snow team under the leadership of the new director. Also new this year is a refined staffing plan, expanded training, contractor oversight and the latest equipment.

Committee Chair Mary Cheh, D-Ward 3, gave Shorter a list of blocks residents reported are consistently ignored by the plows. On Friday, all departments that would normally respond to a snowstorm are running a simulation to ensure communication and access to streets is running smoothly, Shorter said.

“We’ll be taking account of … any challenges: metal plates, litter bins or whatever, that would prevent us from completing our routes. That’s what our operation will be focused on,” he said.

D.C. employees also will be tasked with riding alongside contractors, to ensure they are clearing the areas the city is paying them to, Shorter said.

While the city prepares its equipment, meteorologists who warn D.C. leaders of incoming weather threats are lowering the alert threshold.

“They don’t happen often, but in addition to blizzards, it’s the ones everybody remembers because they were sitting in their cars for eight hours,” Chris Strong with the National Weather Service said recalling the icy evening commute Jan. 20, 2016.

Testifying in front of the District’s Transportation Committee, Strong said the circumstances of that icy commute Jan. 20 were rare.

“Thirty-six hours before the storm came, there was slight chance of snow in the forecast … but the way our policy was that winter, there wasn’t anything to activate on such a low chance,” he told the committee.

Once they knew it would snow ahead of rush hour, it was too late to treat the roads. That horrific commute has now changed the region’s policy.

“You go up to 30 percent chance the evening before, we’re on the phone. We’re calling [District Department of Transportation] and DPW letting them know there’s the chance of this type of event happening,” he said of the new policy.

Part of the reason the Jan. 20 conditions were underplayed, Cheh suggested, was due to the focus on the incoming blizzard that hit later that week.