Before departing Police Chief Cathy Lanier moves to her next job as the head of security for the NFL, she spoke with WTOP's Bruce Alan about her run as chief, what she accomplished and what's ahead for her.
Listen now to WTOP News WTOP.com | Alexa | Google Home | WTOP App | 103.5 FM

WASHINGTON — Police Chief Cathy Lanier is saying goodbye to the District after 26 years with the Metropolitan Police Department, the last nine as chief.

Her last day is Saturday. And before she moves to her next job in New York to take charge of security for the NFL, Lanier spoke with WTOP’s Bruce Alan about her run as chief and what’s ahead for the District’s departing top cop.

Below is an edited and condensed version of their conversation. Listen to the full interview above.

Alan: You have to be satisfied with your run here as chief of police.

Lanier: I’m very satisfied, Bruce. I’ve had a wonderful career. I’ve worked with wonderful people in the greatest city in America — what is there to not be happy about?

Alan: There must be things you wish you had done differently.

Lanier: Of course there are. … We are in a very good place here. You can’t always be perfect, and things aren’t always going to go the way you want them to go. Overall, I’m very happy with the way things are, the way I’m leaving the department and the city.

Alan: As popular as you’ve been in the District, with approval ratings most politicians would kill for, have you ever considered going into politics?

Lanier: No, absolutely not. It’s just not me, not my personality, not my strength. You know, it never crossed my mind.

Alan: Relationships between police and the citizens they serve are at a low point around the country, but not quite as bad in D.C. Why do you think that is and do you take some of the credit for that?

Lanier: I have to give the credit to where the credit’s due, and that’s an effort by every member of the department and the people in the community to work with us and build that trust. That’s a two-way street. I’m very proud of the fact that our officers are very professional and that our community members are really working hard to make our city safer. Hats off to all of them for that.

Alan: You took some heat recently for saying that the criminal justice system in D.C. is “broken,” particularly in regard to repeat offenders. What made you say it in the first place and what would you do to repair it?

All I’ve asked … let’s examine the system start to finish and find out where the problems are. It just seems like there is this brick wall to making the whole system transparent.

When you have repeat violent offenders that are repeatedly victimizing people in the streets, it’s heartbreaking for us on the front end of the system. Because we’re there in the immediate aftermath. We’re not reading about it in a case jacket. … We’re looking at the victims. And it is heart-wrenching.

To attack me for saying what I’ve been saying for 20 years, and very vocally for the last 10 years, I don’t understand why all of a sudden it’s so shocking for me to repeat what I was saying. There is no reason why people should be allowed to repeatedly commit violent crimes against people in our community. And if we aren’t outraged enough for us to take a look at the entire system and find out where the problems are, that’s not finger-pointing, that’s transparency and that’s what the American public wants.

Alan: What changes would you make?

Lanier: I can’t point my finger to any one thing that is the problem. There are probably lots of small things that add up to a big problem. All of us in the justice system will take a piece of that … policing … prosecuting … legislation that hasn’t been changed in many, many years. We all have to own this. If we don’t all own it, it’s not going to get fixed.

Alan: Did you hear from prosecutors or judges after you made theses comments?

Alan: Is there a single case that is unresolved that will stay with you?

Lanier: There’s lots of them. … Shaquita Bell — even though we were able to finally close that case, we were never able to find her body for her mom. Relisha Rudd … I could go on and on. There were lots.

Lanier: Frustrations seem to get a lot of attention, I probably ought to stay away from that. … Still frustrated that they don’t make a good police uniform for women.

Alan: Do you foresee any problems that will worsen in the years to come?

Alan: What do you consider to be your greatest accomplishments?

Lanier: The drop in homicides. We really put our focus on dropping homicides and reducing the number of people under the age of 18 that were murder victims on our streets. We did a fantastic job doing that. I’m just so proud. … Building community relations and modernizing the department with innovative technology.

Alan: You’ve handled some of the biggest events in the world like the inaugurations, state visits and massive protest marches. Is keeping the Super Bowl safe going to be a walk in the park?

Lanier: I wouldn’t say a walk in the park. … The Super Bowl is a little bit different of a challenge, but I think my experience (in special events planning and security) will go a long way.

Alan: What will you miss most about living in the District?

Lanier: D.C. to me feels like a little hometown, it doesn’t feel like a big city. And now I’m going to be in a big city. So that’s what I’ll miss. 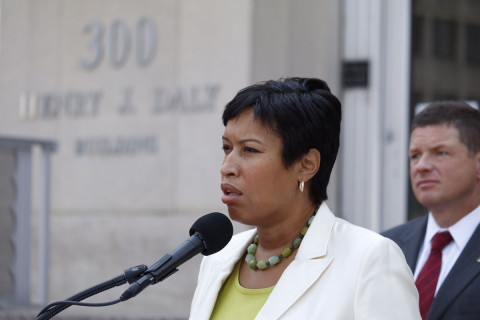 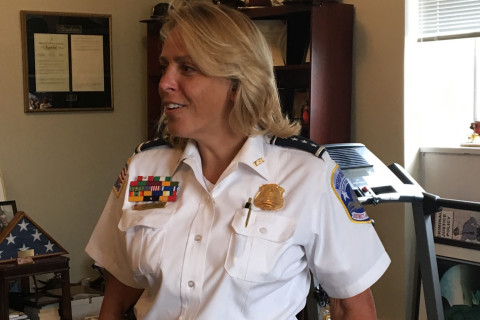