Pope Francis visited D.C. one year ago this week, and area Catholics are being asked to mark the anniversary by recommitting to the pledges they made.
Listen now to WTOP News WTOP.com | Alexa | Google Home | WTOP App | 103.5 FM
(1/3) 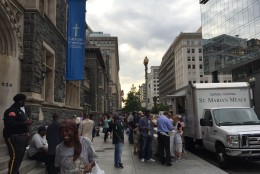 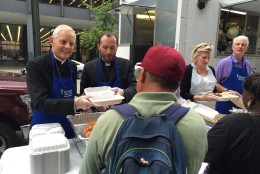 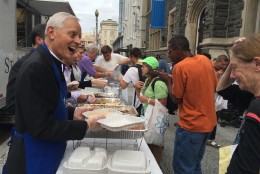 WASHINGTON — Pope Francis visited D.C. one year ago this week, and area Catholics are being asked to mark the anniversary in a specific way.

Before the pope’s visit, more than 100,000 people around here made a pledge to Walk With Francis — meaning they would follow the pope’s example through prayer, advocacy and service.

Now, local Catholics are being asked to recommit to that pledge, through an effort called Walk With Francis 2.0. They’re also urged to share what they’re doing on social media with the hashtag #WalkWithFrancis.

“Those three days he was here (were) days of kindness, of calm; there was almost no problem in the city. If we could replicate that every day … someone asked me, ‘Why can’t it be like this all the time?’ And my answer is, it could be if it we all worked at it. If everyone did one good thing, one good deed a day, imagine what this world would be like.”

Secondly, he said, it’s important to help the less fortunate.

“There are a lot of people who have a lot less than we do, but that doesn’t make them any less members of our family, and so we have to be there for them,” he said.

In order to speak with WTOP, the cardinal took a break from helping to serve the homeless Wednesday dinner outside Catholic Charities on G Street, in Northwest. The weekly meal is provided through the St. Maria’s Meals Program.

Wuerl said he has seen the pope several times since his historic visit.

“He remembers this trip so vividly. Any time I see him in Rome, and there’s a moment, I remind him how blessed we were with his visit, he always smiles and says what a great time he had.”

Wuerl said the pope “lights up” when he talks about his time in the nation’s capital.

“I think he got a good picture of a city with a heart.”