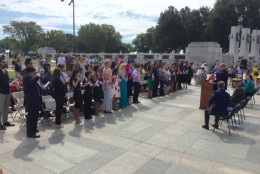 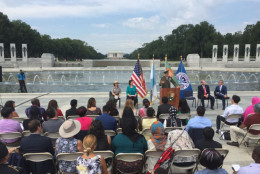 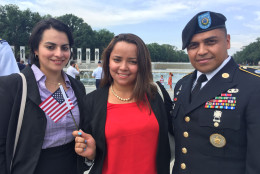 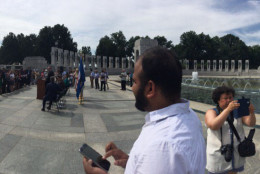 Both events were held to honor the 100th anniversary of the National Park service.

“National parks belong to all of us,” said NPS Spokeswoman Kathy Kupper. “They’re the most important natural and scenic spaces we have in our country and there’s no better place to welcome our newest citizens and to show them what is now part theirs as new citizens of the United States.”

All told, 16 naturalization ceremonies were held Thursday in parks nationwide. The U.S. Citizenship and Immigration Sevice’s goal is to hold at least 100 throughout the year to honor the park service anniversary. After Thursday’s ceremonies, it’s held 78.

Also, to mark Thursday’s 100th anniversary — there will be free admission for all visitors into all national parks throughout the weekend.

The Park Service took an aerial photograph of Thursday’s gathering on the mall. The first 1,000 people to arrive received a T-shirt commemorating their participation and were allowed to keep their umbrella.

The park service says its emblem contains elements symbolizing the major facets of the national park system. A Sequoia tree and bison represent vegetation and wildlife, mountains and water represent scenery and recreation, and the arrowhead shape represents history and archaeology.