A massive underground transformer fire in downtown D.C. has closed L Street in Northwest, and while Sprint's 911 service is back up, other Sprint service is still affected.
Listen now to WTOP News WTOP.com | Alexa | Google Home | WTOP App | 103.5 FM
(1/8) 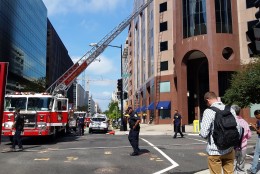 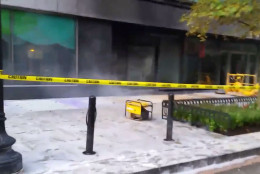 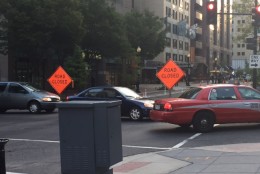 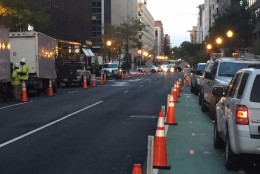 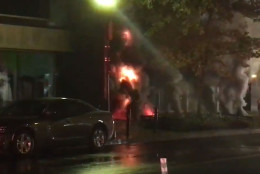 WASHINGTON — A massive underground transformer fire in downtown D.C. has closed L Street in Northwest and had impacted some Sprint service, and as a result 911 service, around the region.

While service was impaired for much of Tuesday, 911 calls made on cellphones with Sprint service are now going through early Wednesday morning, according to police from Fairfax and Montgomery counties. Sprint said on their Facebook page at about 3 a.m. that 911 service had been restored.

Around 7 p.m. Tuesday, Sprint said that some D.C.-area customers were receiving a busy signal if calling 911 because of the fire.

The portion of L Street between 19th and 18th streets in Northwest is expected to be closed through Wednesday after a transformer fire broke out around 11 p.m. Monday. The fire was extinguished around 2:30 a.m. Tuesday and its cause is not yet known.

Earlier Tuesday, Sprint said some wireline customers in the D.C. area were not able to access voice and data service ,and that there may be a problem with location services. Local police agencies, however, said Sprint cellphone service was having problems in the area and impacting 911 calls.

On Tuesday, Arlington, Fairfax, Prince William, Montgomery and other counties all said anybody having trouble reaching 911 from a Sprint phone should try calling another way, either by using a landline or using a phone with another service provider. Arlington and Fairfax counties suggested trying their new 911 texting service.

Pepco workers were prevented from going down to the transformer to make repairs earlier Tuesday. Workers were able to look at the damage through cameras, but were still unable to determine how bad the damage was or when it would be fixed, said Pepco spokesman Vincent Morris.

On Tuesday morning, residual smoke set off an alarm at a building across the street from the scene, triggering a temporary evacuation, D.C. Fire and EMS spokesman Vito Maggiolla said.

Pepco worked through the day to restore power to the area, but Morris said it could be until 3 p.m. Wednesday until power is restored.

The Federal Reserve said in a statement that office space it leases nearby has been without electricity, but no essential operations are affected. Employees who can telecommute are working from home.

When the fire broke out, flames flickered above the sidewalk and heavy smoke streamed out from below. Firefighters checked the surrounding buildings to prevent the spread of fire. They waited for Pepco’s arrival to cut power in order to attack the fire directly, D.C. Fire and EMS officials said.

There were no reports of injuries.