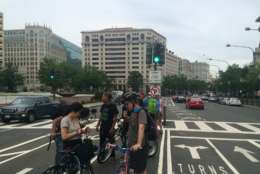 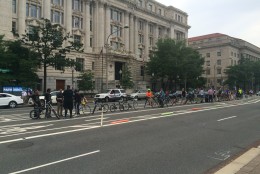 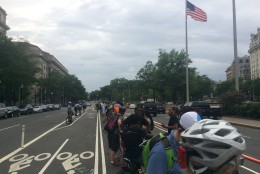 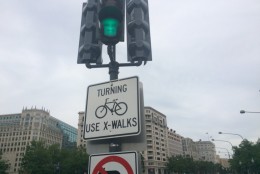 WASHINGTON — Standing side by side with bikes in hand, dozens of bicyclists formed a human shield around two blocks of bike lanes in D.C. on Thursday. It was a push for more protection for cyclists who frequent the area outside the downtown Wilson Building.

The riders want to see protective barriers known as “park-its” placed along the 1300 and 1400 blocks of Pennsylvania Avenue. The black and white curbs exist between 3rd through 13th streets and deter cars from making illegal U-turns over bike lanes ahead of an intersection. Riders want them extended from 13th Street through 15th Street.

“It’s fairly common for a cyclist to have a near miss or a collision with a vehicle that has struck them, making one of those illegal U-turns,” said Samantha Wetzel, who organized the gathering.

James Daniel, of the Columbia Heights area of D.C., who bikes to work, says he has had a few near misses after drivers choose to turn around in front of oncoming bikes with no warning.

“By the time a bike stops, we’re already on your hood,” said Sterling Stone, of Washington.

“There is really no reason why the city ought not to really protect us here,” said Steve Seelig, who rides frequently in the area on a tandem bike with his 6-year-old son.

In a statement, the District Department of Transportation says they are looking into installing the lanes along the stretch of road.

“DDOT’s engineers continue their technical examination of installing park-its between 13th Street and 15th Street, NW, on Pennsylvania Avenue, taking into account multiple proposals, accident data, signalization, benefit analysis and strategies to ensure a positive outcome in the inevitable interactions among pedestrians, bicyclists and vehicles on Pennsylvania Avenue. Our goal is to ensure they all can safely co-exist.”

Joining the cyclists was D.C. council member David Grosso, who said he is not willing to accept that explanation.

“I think it would be better if we went ahead and protected the lanes across the city, but at least right here in front of City Hall,” Grosso said.