According to a police report, a fan altercation outside Audi Field on Sunday night was started by a dozen D.C. United supporters and injured seven Seattle fans, sending one to the hospital.
Listen now to WTOP News WTOP.com | Alexa | Google Home | WTOP App | 103.5 FM

A verbal confrontation between fans turned violent outside of Audi Field on Sunday night, following D.C. United’s 2-0 win over the Seattle Sounders.

According to the D.C. police report, seven out-of-state victims claimed they were involved in a fight with a dozen D.C. United supporters after 11 p.m. outside a bar on Half Street Southwest, a block east of the stadium. No weapons were used in the alleged assault, which left those involved with cuts and bruises, sending one to the hospital, according to Sounders blog Sounder at Heart.

It’s unclear which supporters groups may or may not have been involved at this point.

After Sunday’s match at DC United, ECS members were attacked by DCU supporters while exiting Audi Field. ECS is assisting SSFC & MLS in identifying the cowards who perpetrated this unprovoked attack. ECS has always condemned violence in the soccer community and continues to do so

First and foremost, our thoughts are with the Sounders fan(s) who were attacked last night. We hope they have a speedy recovery.

Immediately, after learning of the incident via Twitter, we contacted the D.C. United front office to express our disgust and offer any assistance we can to bring those responsible for justice. Violence is not tolerated in the Barra Brava and has no place in the sport we all love.

We have no information as to who is responsible. I wish that we did so that the perpetrators can be held accountable. We have asked anyone who has video, photos or even a description of those responsible to contact us so that we can render any assistance we can in identifying the individuals.

It’s unclear whether the team was unaware that more than one fan was injured in the incident at the time of the statement. WTOP has reached out for more clarification and will update if the team provides clarification. 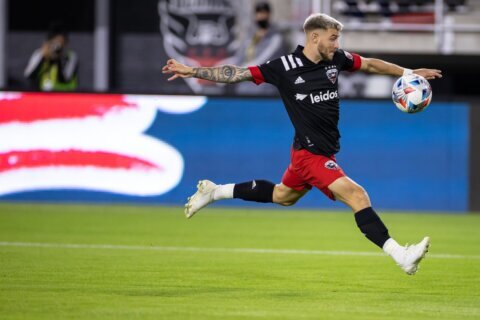 Arriola could leave DC United for Mexico, other MLS team