Construction of the new 5,000-seat for the Loudoun United soccer team is on track, but will not be finished until well into the team's inaugural season, WTOP has learned.
Listen now to WTOP News WTOP.com | Alexa | Google Home | WTOP App | 103.5 FM

LEESBURG, Va. — The calendar and clock have conspired to prevent Loudoun United from playing a good portion of its inaugural season soccer matches in a new 5,000-seat stadium being built near Leesburg Airport, WTOP has learned.

The new United Soccer League team — owned by Major League League’s D.C. United — had initially hoped to play all of its first season at a stadium and training facility being built in Bolen Park, in Leesburg.

However, Loudoun County elected leaders — and now, the team — acknowledge Loudoun United Stadium will not be ready for the team’s first several home games.

The new second level professional team’s first six games are away games — beginning March 9 — according to the league schedule posted on the team website.

Loudoun United’s first scheduled Home game — May 3, against Bethlehem Steel — as well as home games through July 28, list the game’s location as TBD — to be determined.

A D.C. United spokesman tells WTOP the team realizes the stadium will not be ready on opening day, but has not determined where the Loudoun team’s initial home games will be played. Audi Field — the home stadium for D.C. United in Southwest D.C. — is being considered, according to the spokesman.

Loudoun County Board of Supervisors Chair Phyllis Randall and Dulles District Supervisor Matt Letourneau, chairman of the board’s finance, government operations and economic and development committee, tell WTOP the extra time supervisors spent in finalizing the deal with the team pushed the stadium’s construction calendar past the point of being able to have the facility ready for the beginning of the season.

“We wanted to take our time,” said Letourneau. “We waited until September to move on that.”

“August 1 was always our date, and we were trying to see if we could get it delivered earlier, and if we can, we still will,” said Randall. “But of course a lot of construction depends on things like the weather.”

Letourneau said the calendar makes it difficult to speed up work.

“Being aware of what winter brings for construction, had we been able to have this lined up as a summer project, we might have been able to move a little faster,” he said.

Letourneau said the county has been preparing the stadium site before it will be able to turn it over to the team to construct the stadium itself.

“The county pieces are really moving a lot of land, and removing spoils,” or waste material found during excavation, said Letourneau. “Land has been cleared, and flattened, and it’s being prepped for a larger facility like this.”

After the county turns the site over to the team, Letourneau said assembling the planned prefabricated modular stadium shouldn’t take more than a few months.

“Infrastructure includes things like utility installation,” added Randall. “We’re still in talks to get Crosstrails Boulevard open, so we believe the infrastructure will be in place if not by August 1, then shortly after.”

Construction of Crosstrails Boulevard, which would provide a connection to Route 7, has been accelerated, WTOP has reported.

Fans will need to be able to drive to, and park at the stadium, Letourneau said.

“Obviously we have to work on the internal road network there in the Bolen Park area, and that includes some of the parking lots,” he said.

Construction of the training facility, and a park and ride facility, will be completed in the second phase of the project, he said.

Letourneau and Randall said the county and its businesses won’t be permanently harmed by missing several home games this year.

“Even though the first home game is somewhere in May and we won’t get it open until August 1, this is their home from here on out,” said Randall. “They’re going to be here for years so we’re not worried about those couple of months of games.”

“As far as the county’s aware, at this point there is not a final determination about when the first matches may be — obviously it won’t be ready for the beginning of the season,” he said. “At some point in the season it’s possible it could be ready, and we’re working with (D.C. United) on that.”

“This is obviously a long-term benefit for the county,” Letourneau said. “We’d like to have it up and running as soon as we can.” 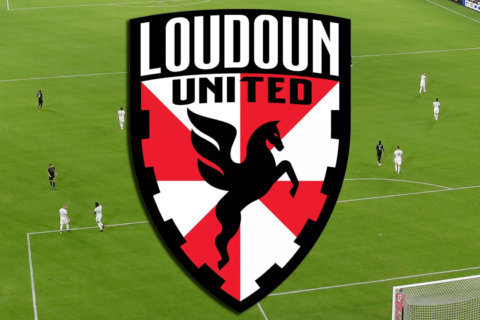