Officials are poised to implement sweeping changes that could transform how drivers navigate the freeway through the District.
Listen now to WTOP News WTOP.com | Alexa | Google Home | WTOP App | 103.5 FM
(1/8) 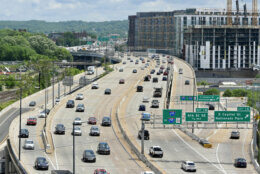 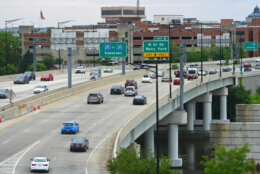 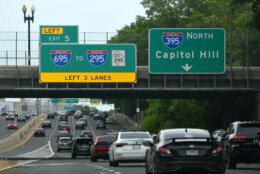 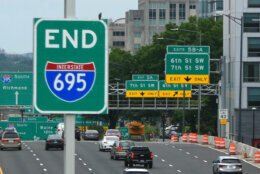 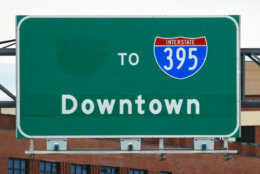 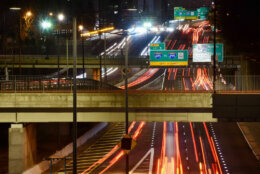 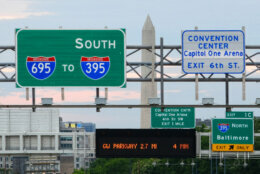 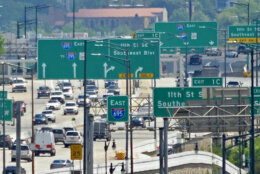 Local highway history was made late last spring when the federal government cleared the way for D.C.’s proposed renumbering of the Southeast Freeway and 3rd Street Tunnel.

Officials are now poised to implement sweeping changes that could transform how drivers navigate the freeway through the District.

The Federal Highway Administration has signed off on a District Department of Transportation request to redesignate the 3rd Street Tunnel as Interstate 195 and extend Interstate 395 across the entire length of the Southeast-Southwest Freeway.

The re-designation of the freeway and tunnel — two of D.C.’s busiest roads — is the most significant interstate highway renumbering in the metropolitan area since 1991, when the eastern half of the Capital Beltway regained its status as Interstate 495.

In the months ahead, the entire freeway from the 14th Street Bridge to Interstate 295 at the 11th Street Bridge will become signed as I-395. The renumbering of the freeway near the Navy Yard neighborhood essentially overrides the Interstate 695 designation.

The decision also creates a new route number in the District, I-195, that will be assigned to the 3rd Street Tunnel. At just over a mile-and-a-half long, I-195 will be one of the shortest three-digit interstates in the country.

In the original proposal submitted to the American Association of State Highway and Transportation Officials (AASHTO) in late 2020, DDOT noted that “motorists are often surprised and confused by the atypical conditions presented by the termination of the I-395 and the beginning of the I-695.”

Safety studies commissioned by the District indicated more than 100 crashes annually were associated with “weaving activity” associated with an “unexpected exit condition.”

DDOT hopes more intuitive route numbering and exit numbers will be beneficial for new or occasional downtown drivers who aren’t as accustomed to navigating the freeways, such as fans traveling to Nationals Park or weekenders headed to the Wharf.

With final approval from federal officials, DDOT is expected to begin the process of changing the signs soon.

“We are in the process of the quantifying the scope of the project to identify the most effective contractual mechanism to the handle the design and installation work,” Stephens said.

A recent effort to install new signs and rehabilitate several large sign structures above the freeway is winding down. Stephens said the installation of new I-395 signs will simply involve overlaying I-195 and I-395 shields on the new green sign panels.

While still sorting out some of the details, DDOT’s intention is to keep current directional designation for I-395 as north-south despite the east-west orientation of the freeway. New exit numbers are expected for the ramps that lead to Nationals Park, the Navy Yard, Barracks Row and I-295.

The creation, realignment and erasure of three interstates are not routine administrative exercises. Doug Hecox with the Federal Highway Administration said that there are several hurdles that transportation agencies must clear before these requests are given a green light.

“DDOT proposed this change to minimize motorist confusion and improve safety, which we support,” Hecox added.

The extent to which I-695 will be recognized remains unclear, but the removal of I-695 shields and exit numbers would serve as a fitting epilogue for a derided and stunted route through the nation’s capital.

During the height of the superhighway era, urban planners were intent on carving a network of looped and legged freeways and spurs through the District and close-in suburbs.

Construction began in phases and portions of the plan began to take shape. A section of freeway behind the Kennedy Center and Watergate Hotel was built in the 1960s, followed by another near the Southwest Waterfront.

The freeway and tunnel through Southwest were to become the backbone of the highways system, sending Interstate 95 under the National Mall and into Northeast.

But a decade or so after the completion of the Capital Beltway, D.C. residents had seen enough.

The freeway and tunnel unceremoniously became I-395 in the mid 1970s, when opposition successfully thwarted further construction of I-95 through the center of the nation’s capital. After the highway revolts, Shirley Highway, the Southwest Freeway and the 3rd Street Tunnel were given a three-digit number more fitting of a spur, while the eastern side of the Capital Beltway became I-95 by default.

The split numbering of the Capital Beltway — the eastern half through Prince George’s County in Maryland and Alexandria in Virginia signed as I-95, and the western half through Fairfax and Montgomery counties as I-495 — operated satisfactorily for about 15 years.

But a campaign advocating for less confusion and more symmetry prevailed, and a mutual request from the transportation agencies in Maryland and Virginia to restore the I-495 designation to the entire Capital Beltway was approved by FHWA in 1991.

The eastern and southern portions of the Capital Beltway have been co-signed as I-95 and I-495 for the last 30 years.

The approved relocation of I-395 eastward to the 11th Street Bridge effectively erases the I-695 holdover that survived the highway revolts of the 1970s.

Originally, I-695 was expected to tunnel under the Tidal Basin and connect the Southwest Freeway to the I-66 Potomac Freeway, but, like the segment of I-95 between College Park and the 3rd Street Tunnel, the I-695 South Leg tunnel was never completed.

The designation remained a hidden, administrative afterthought for the next few decades.

In 2012, the District inexplicably resurrected the previously unsigned I-695 route number above the Southeast Freeway, mounting brand new blue shields above the freeway for the first time, bewildering even longtime D.C. drivers.

In 2018, a routine sign replacement project behind the Kennedy Center uncovered remnants of the foregone South Leg tunnel plan. On a breezy August morning, a work crew carefully pulled a piece of plywood off an old sign structure and revealed an original green guide sign for the never-built section of freeway.