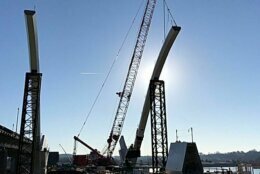 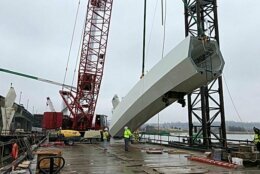 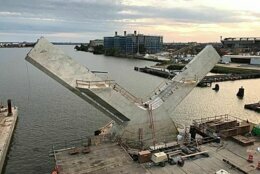 The new Frederick Douglass Memorial Bridge is halfway to completion, according to the D.C. Department of Transportation.

The bridge foundations are complete, and the first of the bridge’s three arches is expected to be finished by the end of February.

The new six-lane bridge will replace the current bridge, which was built in 1950 and is now obsolete, according to the city.

The new bridge will have more safety features for cyclists and pedestrians, as well as four pedestrian overlooks and two piers that will appear to float over the Anacostia River.

The construction project will extend beyond the bridge, to include a redesign of the Interstate 295-Suitland Parkway interchange.

The bridge project broke ground in 2018, and D.C. officials say it is on track for completion in 2021.

What are the potential I-495/I-270 tolls? Md. Transportation Authority gets 1st look