"We think this is the completely wrong direction for Maryland transportation," said Ben Ross of Bethesda. "What we need is a rail network that connects the whole central part of the state."
Listen now to WTOP News WTOP.com | Alexa | Google Home | WTOP App | 103.5 FM
(1/4) 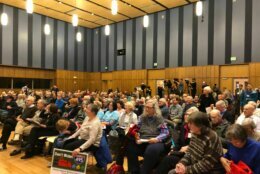 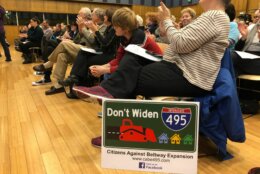 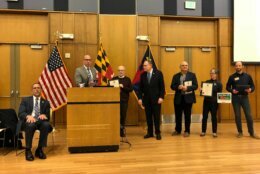 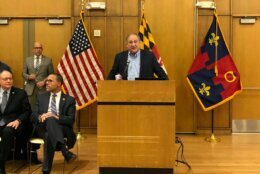 Montgomery County residents opposing Maryland Gov. Larry Hogan’s plan to widen and add toll lanes on the Capital Beltway and Interstate 270 turned out in force Monday night, at a rally led by the county’s elected leaders.

“We think this is the completely wrong direction for Maryland transportation,” said Ben Ross of Bethesda. “What we need is a rail network that connects the whole central part of the state.”

Trains were a popular alternative for many residents opposing the governor’s plan.

“I think it’s incredibly shortsighted to put through a widening project without simultaneously addressing the public transportation issues,” said Jessica Snow, of Germantown. Snow said widening I-270 would simply add more congestion to the Beltway.

Her recommendation to ease traffic congestion is to build a rail line from Frederick, Maryland, to the Shady Grove Metro Station. A familiar refrain among opponents is that road widening would produce more traffic.

Many of those who attended the Monday night rally live near the Beltway themselves.

“We need to move people and not add more cars and not take any houses, not take any park land,” said Mae Novak, of Silver Spring.

“I don’t want any more noise from the Beltway than I already have and I don’t want to see any of my neighbors lose their homes.”

Hogan has said, in the past, people of Maryland are tired of inaction and tired of wasting their lives sitting in traffic.

Hogan canceled this week’s meeting of the State Board of Public Works, which will push into the new year the debate over proposed Beltway and I-270 tolls.

The governor’s office responded to the rally Tuesday morning.

“We acknowledge that 14 percent strongly oppose our traffic relief plan, and they continuously hold rallies and protests. But after 30 years of no solutions and 3.5 years of delays, nearly 70 percent of Montgomery and Prince George’s voters support it and want action now,” said Director of Communications Michael Ricci.

“Our interstate agreement with Virginia gives us a historic opportunity to fix the entire Capital Beltway and solve the region’s biggest problem.”