Md. asks for community input to solve gridlock on northern end of I-270 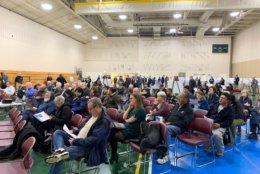 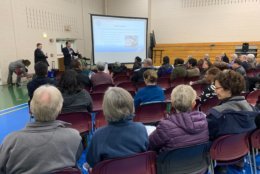 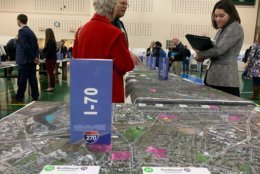 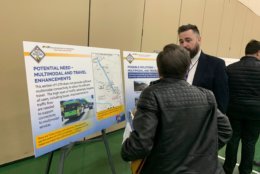 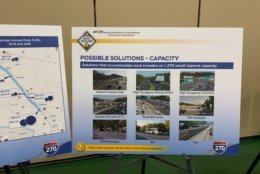 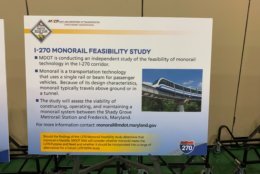 Drivers traveling daily on Interstate 270 from Frederick County to D.C. often have long commutes, and Maryland is taking suggestions on moving traffic faster between Gaithersburg and Frederick.

“(I)-370 to Frederick, that needs to be addressed, it’s really behind the times,” said Jay Maxwell of Gaithersburg.

Maxwell was one of many who showed up at the Activity Center at Bohrer Park in Gaithersburg Thursday to hear from the state and offer their solutions.

“It’s wide open at this point. We really just want the public’s feedback,” said Lisa Choplin, project director for the Interstate 495 and I-270 P-3 project office at the Maryland Department of Transportation State Highway Administration.

Choplin told the audience when you look at the I-270 and I-495 corridor as a whole, motorists spend 87 hours — which equals to a total of 11 days out of the year — stuck in traffic.

With the northern end of I-270, the congestion is not only taking its toll on commuters, but also truckers driving freight through the area consider it one of the worst areas in the nation, according to the state.

Maxwell said he would like to see the road widened where it drops down to four lanes. Charles Gordon, who travels to Frederick frequently, agrees.

“I think they could add a lane at little cost,” Gordon said.

But state officials in attendance said that would not be the case, and the state would not have money to pay for the widening.

Among the options offered were express toll lanes or high-occupancy toll lanes that would be operated as part of a public-private-partnership or P3.

Maryland officials said the population in this region of Maryland is expected to go up by 22% by 2040. After hearing that, Sharon Edelstein of Frederick, wanted to know why the focus is not being placed on offering more high-speed public transit options.

“I live right downtown in Frederick, it would be so nice if I could get off the road,” Edelstein said.

Among the options offered are dedicated bus lanes and a monorail system, which would run from the Shady Grove Metro station to Frederick.

Montgomery County Councilmember Sidney Katz called the monorail an intriguing idea. He also said he believed reversible lanes would be a viable option because the costs associated with the lanes would be low.

“They can do that fairly inexpensively, not to say that there is no expense, but they already have the right of way,” Katz said.

Anyone with solutions or comments should reach out to the state on the program’s website, by emailing 270-Study-p3@mdot.maryland.gov or by calling 833-858-5960.