The latest delays for Silver Line construction have baffled some Metropolitan Washington Airports Authority leaders, who are hopeful that the timeline for completion will be sped up over the next few months.
Listen now to WTOP News WTOP.com | Alexa | Google Home | WTOP App | 103.5 FM

The latest delays for Metro’s Silver Line construction have baffled the D.C. region’s airport authority, which is hopeful that the timeline for the commuter rail line’s extension to Dulles International Airport will speed up over the next few months.

“We’re sort of puzzled why it would take more than a year,” Metropolitan Washington Airports Authority board member Walter Tejada told the contractor building the rail yard.

Hensel Phelps operations manager Michael Barker said even though many pieces of the yard are more than 90% complete, the testing and commissioning process can take a long time if done one step at a time.

“Most of what we’re testing right now is the mechanical systems, the electrical systems making sure they’re operating correctly, and then the last system to be tested is bringing the train on the yard and moving it around the yard,” he said.

But Barker also said there is a real possibility the projected two month delay WTOP revealed earlier this month could be erased depending on negotiations with the Airports Authority about testing plans and payment beyond the current $290 million value of the rail yard contract.

Those agreements could be reached over the next few months. If not, the schedule could be left as is.

“Construction issues in a project of this size and complexity are quite common. Let me assure everyone the Airports Authority’s working closely and cooperatively with WMATA and our construction contractors to address any issues that arise with the ultimate goal of delivering a safe, reliable and durable rail line that will serve our region well for many years to come,” Potter said.

Still, commuters and people who fly from Dulles want to know when the line will open.

“The big issues are still power and communications,” Barker said, along with site conditions, design changes and other concerns.

Slides presented to the Airports Authority board blame current delays on train testing issues and problems constructing a clean room in one of the main maintenance buildings. They were also still waiting on parts for car hoists as of June 13, and have put required fixes on hold for tracks and switches where trains move from one track to another. They are also retesting the quality of the ballast — the rocks that support the tracks and rail ties — in some places.

Systems testing is the biggest batch of work left though, Barker said, since the rail yard looks basically finished from the outside.

“We’ve gone an awful long way in 4 years, and now we’re going to take a year to go that far, which seems to be counterintuitive and really not very productive,” Airports Authority Board Member Kate Hanley said.

Changes to the testing schedule could include allowing more testing on the outer parts of the yard while work is finished on other areas rather than a more linear progression.

For now, Barker expects trains to begin testing in the yard in early fall.

The rail yard is being built by a separate contractor from the group building the stations and tracks from Reston to Dulles Airport and Ashburn.

While the stations and tracks are also behind schedule, they are less behind than the rail yard. The tracks are expected to be ready for a possible start of service before July 2020.

Metro has said it will only begin operations if both the stations and rail yard are ready. Metro has up to 60 days after accepting ownership of the extension to start running trains, so if the rail yard is not finished until July 2020 or later, service might not begin until that fall. 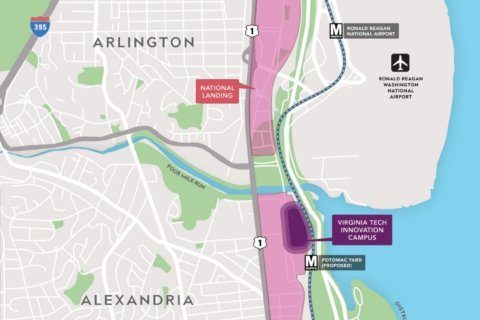