Fixes promised for families losing homes to I-66 toll lanes

Following complaints from families being forced out of their homes by construction of toll lanes on Interstate 66, Virginia Gov. Ralph Northam promised on WTOP Wednesday that the group would now be treated the right way.
Listen now to WTOP News WTOP.com | Alexa | Google Home | WTOP App | 103.5 FM

WASHINGTON — Following complaints from families being forced out of their homes by construction of toll lanes on Interstate 66, Virginia Gov. Ralph Northam promised on WTOP Wednesday that the group would now be treated the right way.

“These families haven’t been treated fairly, and we have made some changes [in] the way that we approach this,” Northam said on WTOP’s “Ask the Governor.”

The project is forcing people out of about a half-dozen homes just off Gallows Road in the Dunn Loring area, where these recent complaints about the process arose. Gallows Road is being shifted to the east as part of the construction process.

Dolly Des Jardins, 81, is among those concerned about delays and rumblings of offers of replacement homes that do not match the convenience of their life on Stenwood Place near the Dunn Loring Metro.

She was initially told to expect an offer last winter with a specific replacement home to be bought for her by Express Mobility Partners (EMP), the private company that will build and operate the toll lanes, but that offer has not come.

Still, until a meeting last week, it appeared the Virginia Department of Transportation, EMP and its subcontractor were planning to force her and others on the street out of their homes by the end of the year, said her daughter Noelle Des Jardins-Vaughan.

“We do not want her to be homeless,” Des Jardins-Vaughan said.

She does not want her mother forced into temporary housing or to face other issues. Des Jardins-Vaughan spent the summer here, because of the initial promise that offers would be in place by then.

“I, living out of state, set aside two months of my life, brought my children over, my elderly dog over, to help my mother. And we couldn’t do anything,” she said.

Her mother has lived at the end of the cul-de-sac for 47 years, since before I-66 connected the region through Arlington into the District.

Des Jardins-Vaughan used to ride horses in the area, and even rode the Metro with her elementary school classmates the day the Dunn Loring station opened a few steps away in June 1986.

“It was a quaint country-like place, which is now, obviously, more city-like,” she said.

Neighbors on the street, Kwong Hii and Siew Lee, hoped to move during the summer to ease the impact of any changes on their children at school.

Now, they said, they have little hope a comparable house could be found before school starts. They remain concerned EMP is putting too much focus on the cost of otherwise comparable homes, which could lead to an offer in the middle of the school year for a home that is zoned to different schools and/or farther from Metro stations.

“There’s some, I think, some room to extend the process for these families,” Northam said. “I was very upset when I heard that, and we’re making changes so that we’re taking care of these families.”

Northam did not say whether VDOT or EMP would cover any additional costs for homes that meet the requirement that are comparable to the ones people are being forced out of.

“VDOT perhaps was not as involved as we should have been, but they are going to be very involved as we move forward, I can promise you that,” he said.

While changes over the last two weeks appear to have things moving in the right direction, Des Jardins-Vaughan is still awaiting results for her mother.

Multiple layers of approval are needed before the Realtor responsible for presenting a proposed new home can finalize an offer. The Realtors are working for Express Mobility Partners, which in turn is under contract with VDOT.

“In the Northern Virginia market, especially Vienna … houses go very quickly,” Des Jardins-Vaughan said. “I feel that VDOT is going to try to help this time and make a different turn for the better for my mother and the other residents, but again, that’s what we’ve heard. Haven’t seen anything yet.”

There were additional challenges over the past year or two as the relocation efforts appeared to start over from scratch, Des Jardins-Vaughan said.

VDOT and EMP met with the homeowners last Tuesday to discuss the issues.

Del. Mark Keam, who represents the area, said he is in “trust-but-verify mode.”

Homeowners are now supposed to get updates twice a week on the search for a new place to live.
That search is supposed to be guided by the homeowners’ priorities, such as being close to a school, Metro stop, work and amenities, and the basic features of the home, such as bedrooms, air conditioning and internet access.

Des Jardins hopes for a house just like what she has now — in the neighborhood she is comfortable in and goes to church in while having limited stairs.

“Location is very important … she’s very familiar with these streets, the area, so she really cannot be moved out or pushed out any further,” her daughter said.

Keam was meeting again late Wednesday with some of the families losing their homes.

With no offer, Des Jardins is now having knee surgery next week that she had tried to delay until after the move.

“She had been putting that knee surgery off for quite some time, thinking she wanted to wait until she was in her new home, thinking the summertime is when she would find a home and she would be relocated and settled … but she can’t put it off any longer,” her daughter said.

It’s one reason she wants to be sure her mother is given additional time to move, especially if they decide to appeal or challenge the initial offer put on the table.

“With her age, she should only have to move one time. In fact, she was hoping she would never have to move,” Des Jardins-Vaughan said.

The area on the north side of I-66 just east of Gallows Road is scheduled to become a major construction zone by next summer. 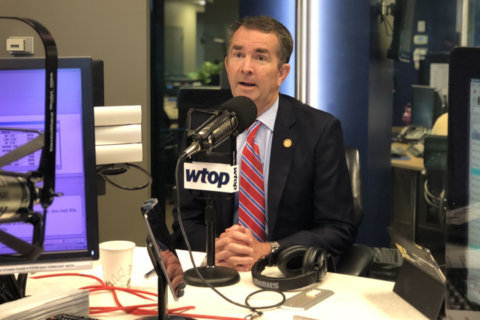 Va. Gov. Northam on WTOP: What’s next for redistricting and controversial pipeline projects?