Take a look at the latest designs for new toll lanes on Interstate 66 and how the changes will impact traffic throughout the area.
Listen now to WTOP News WTOP.com | Alexa | Google Home | WTOP App | 103.5 FM

WASHINGTON — Under the latest designs for new toll lanes on Interstate 66 outside the Capital Beltway, a Metro power substation would be relocated, much of a jogging and bike trail would be next to the highway, and drivers would see dozens of new bridges, toll gantries and traffic patterns.

The refined designs will serve as the basis of final public hearings next month. Construction work could begin before the end of the year, with the most significant work ramping up along much of the 22-mile corridor between the Beltway and Gainesville, Virginia, in the first half of 2018.

The lanes are scheduled to open in 2022. They will be free for cars with three or more people and an E-ZPass Flex switched to HOV mode, while other vehicles will be charged a variable toll that rises or falls based on the amount of traffic in the toll lanes.

The multicolored final designs can be complicated to read, with curling purple aerial structures, dashed lines for potential noise walls, red toll lanes, yellow general purpose lanes and orange ramps next to thin red lines that mark the home and business property that will be taken or purchased by the project.

Among the details in the designs:

Other highlights (from east to west):

This is the design plan for the I-66-Route 28 interchange.

The tolls on I-66 inside the Beltway are separate but related to this project. Those rush-hour only tolls begin for solo drivers in December. 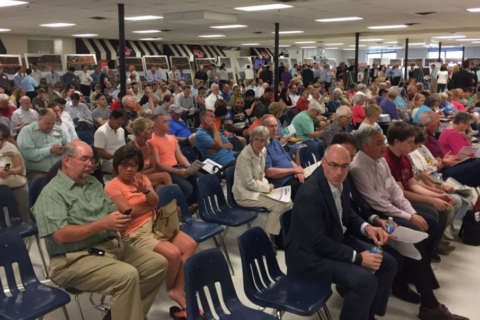 Va. announces final chance to sound off about I-66 toll lanes