WASHINGTON — Major changes are coming to a regularly congested part of Virginia Route 7, and to plans to revamp Ashburn-area commutes, if the Loudoun County Board of Supervisors approves two recommendations Thursday night.

On Route 7, the board is set to back a plan to spend about $26 million to widen the road to three lanes each way all the way from Virginia Route 9 to the Dulles Greenway.

The Virginia Department of Transportation already added the third westbound lane from West Market Street in Leesburg to Va. 9/Charles Town Pike in 2015, but Supervisor Ron Meyer said that anyone who has driven through the area knows there is a bottleneck.

“We are going to fix this bottleneck problem once and for all,” Meyer said.

Today, there are backups to and from the Greenway past Leesburg, and additional fixes are called for at the end of the Greenway, where it meets U.S. 15.

County transportation staff also recommend the board change long-term plans to call for four lanes each way on Route 7 rather than three.

In 2016, there were 68,000 vehicles per day on Route 7 at the Route 9 interchange. The most significant growth in traffic recently is between Round Hill and Route 9.

Additional interchanges are planned in coming years at White Gate Place, Route 690 (Hillsboro Road) and west of Round Hill at Route 7 Business (West Loudoun Street)/ Route 1320 (Evening Star Drive), as part of the long-term effort to turn Route 7 into a limited-access highway when parallel roads are completed.

In the shorter term, a VDOT study recommended improvements to the traffic circles and eastbound ramp at Route 9, and an improved merge onto South King Street that will be funded in part by leftover money from the truck climbing lane project.

A plan to widen Farmwell Road to six lanes could be taken off the table by supervisors Thursday.

“The issue is, we were going to turn a four-lane road into a six-lane road through a mostly residential community,” Meyer said.

Initial designs had been moving forward on the six-lane road under a $1.8 million contract awarded in fall 2015.

“We heard from 250 angry people at a high school meeting about this project, saying ‘We don’t want six lanes in our residential neighborhood,'” Meyer said, remembering a meeting held last May.

The revised project would add turn lanes and other smaller-scale improvements at a series of intersections including Ashburn Village Boulevard, and Smith Switch/Waxpool Road. Revised designs would now be completed in spring 2019, and county transportation staff expect it will only delay worsening traffic backups along Farmwell Road.

Meyer hopes the county can focus funding on finishing extensions of Shellhorn Road, which would be a parallel alternative to the tolled Dulles Greenway and congested Waxpool Road to get between the Loudoun County Parkway and Route 28. 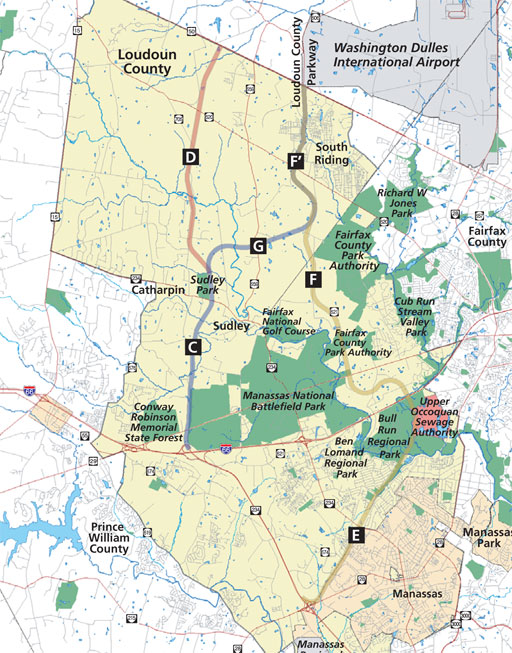 Resurrection of Bi-County Parkway places some on edge in Prince William Co.