Transurban: Waiving 495 Express Lanes tolls would not have helped traffic much on Wednesday

Wednesday morning's crash near the American Legion Bridge made the commute a nightmare. Should the Express Lanes tolls have been waived to open up traffic? And when can those tolls be waived?
Listen now to WTOP News WTOP.com | Alexa | Google Home | WTOP App | 103.5 FM

WASHINGTON — The morning drive was a doozy for many on Wednesday, when an accident shut down the Inner Loop of the Beltway at the American Legion Bridge and the ripple effect spread to roads near and far. 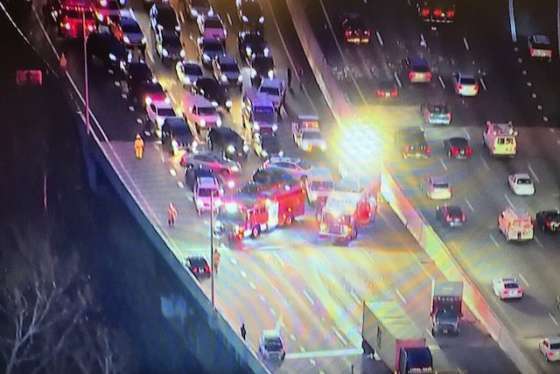 ‘One of the worst’ morning rush hours snarls DC-area traffic

Drivers in the D.C. area saw major delays Wednesday morning after concrete debris and crashes on the Capital Beltway/I-495 halted traffic and briefly shut down the Inner Loop at the American Legion Bridge.

On WTOP’s “Ask The Governor,” a listener asked Virginia Gov. Terry McAuliffe why tolls on the 495 Express Lanes were not suspended to get traffic moving.

McAuliffe called it a “valid point” and said he would have the transportation secretary check it out.

“I will go back and ask Secretary Aubrey Layne to talk to Transurban,” McAuliffe said.

Mike McGurk, with Transurban, the company that operates the toll lanes, said they’re in constant contact with Virginia transportation leaders. But he said in Wednesday’s scenario, waiving tolls was not the way to go.

“Suspending the rules on the Express Lanes would not have made a real difference in the regular lanes.  All it would have done is eliminated the faster option that tens of thousands of commuters took advantage of (Wednesday) morning on the Express Lanes,” he said.

He said it’s not just about people who pay tolls in the Express Lanes.

“We also have those carpoolers and those transit riders that are sometimes choosing that mode of transportation to take advantage of that trip on the Express Lanes. They, too, rely on the faster-moving corridor in the Express Lanes.”

McGurk said Transurban can waive tolls during overnight snowstorms, when lanes are being treated.

“That snow and ice melt is actually more effective the more vehicles that are traveling over it. So what we actually decide to do ourselves is to lift that toll rate to get some of that overnight traffic moving on the Express Lanes,” said McGurk.

The 495 Express Lanes agreement between the Virginia Department of Transportation and Transurban said tolls can be suspended if traffic is diverted into the toll lanes during a declared emergency, or if there is a serious incident involving injuries or deaths in the general purpose lanes or on another state highway.

An excerpt from the agreement:

In the event the HOT Lanes are designated for immediate use as the alternate route for the diversion of traffic from another State Highway, or from the GP Lanes, temporarily closed to all lanes in one or both directions due to a declared emergency issued pursuant to applicable Law by the Department or any other Governmental Authority or a significant incident involving one or more casualties requiring hospitalization or treatment by a medical professional or one or more fatalities on the affected State Highway or GP Lanes from which such traffic is diverted, the Department shall have the right to divert such traffic onto the HOT Lanes and to order immediate suspension of tolling on the HOT Lanes in the direction(s) of diversion. The Department and the Concessionaire shall consult with each other on such diversion of traffic and any suspension of tolling. The Department shall have no liability to the Concessionaire for the loss of Toll Revenues or the increase in costs and expenses attributable to the period that such order is in effect.

This story has been corrected, to reflect the relationship between the Virginia Department of Transportation and Transurban regarding the suspension of tolls. McGurk clarified to WTOP, “VDOT can order the suspension of tolls. Of course we’d be in touch to tell them it’s completed, etc., but in those instances it’s not a discussion; it’s a directive to us.”