$3.7B I-66 project would transform congested area

The $3.7 billion project widens I-66 outside the Capital Beltway to three regular lanes and two Express Lanes in each direction. It's expected to be completed in 2022.
Listen now to WTOP News WTOP.com | Alexa | Google Home | WTOP App | 103.5 FM

CENTREVILLE, Va. — Virginia Gov. Terry McAuliffe led a ceremonial groundbreaking Monday for the long-awaited multibillion dollar highway project that would expand I-66 to 10 lanes outside the Beltway — three regular lanes and two Express Lanes in each direction.

McAuliffe praised the public-private partnership, under which the private consortium Express Mobility Partners has been designated to design, build, operate and maintain the Express Lanes in exchange for the toll revenue over at least 50 years.

“We are now transforming the most congested area, the most congested road in the United States of America,” McAuliffe said. “We are taking a significant step today about moving more people, giving them more travel options so that they can go faster and more [reliably] on all different modes of transportation on I-66,” he said. 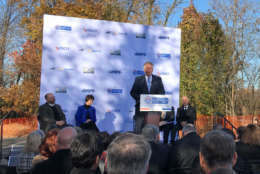 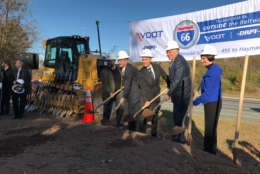 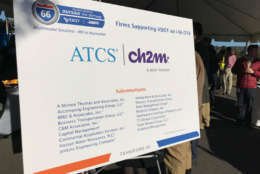 Transportation Secretary Aubrey Layne said the nearly 23 miles of Express Lanes from the Beltway to University Boulevard near Route 29 in Gainesville will reduce congestion and increase reliable travel times.

“Our goal here is to move more people through the I-66 corridor, and the improvements we’re putting in place today will do just that,” Layne said.

The $3.7 billion project includes plans for major interchange improvements, park-and-ride lots and facilities to accommodate bicyclists and pedestrians. Commuter bus service is also expected to increase on the expanded highway.

McAuliffe praised the agreement, which provides no public funding for the construction.

“So let me be clear: No taxpayer money will be used on this new corridor, not a cent of money,” McAuliffe said.

Carpools of three or more, and buses, will be exempt from tolls. Vehicles with fewer than three occupants will be subject to tolls in the Express Lanes. Those lanes will rely on dynamic pricing — tolls will rise based on demand, with rising prices intended to avert some traffic to keep the lanes flowing.

The project is scheduled to be completed in 2022.