Commutes across the D.C. region are projected to include significantly more time sitting in traffic in coming years, and a number of elected leaders believe there may not be much that can be done to change that.
Listen now to WTOP News WTOP.com | Alexa | Google Home | WTOP App | 103.5 FM
(1/10) 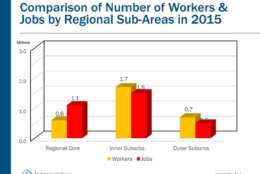 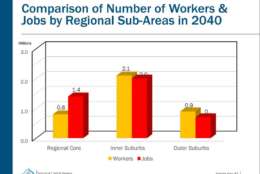 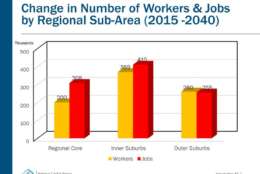 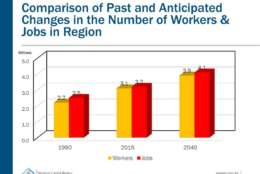 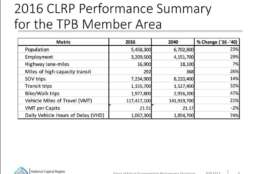 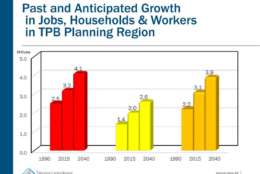 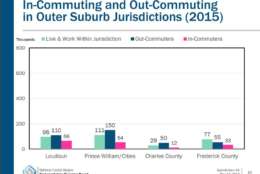 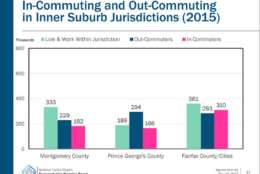 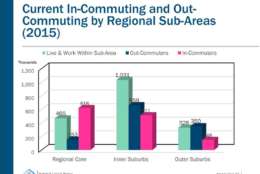 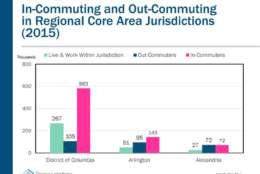 WASHINGTON — Commutes across the D.C. region are projected to include significantly more time sitting in traffic in coming years, and a number of elected leaders believe there may not be much that can be done to change that.

The amount of time cars spend sitting in traffic is expected to rise 74 percent by 2040 as population grows by about 23 percent and the number of jobs grows by 29 percent, presentations to the National Capital Region’s Transportation Planning Board Long-Range Plan Task Force last week projected.

The average delay per trip from the outer suburbs of Prince William, Loudoun, Frederick (Md.) and Charles counties is expected to jump from 23 minutes to 33 minutes. It’s in these areas where the number of miles driven is expected to jump by a higher percentage than anywhere else.

“Auto commuters from the outer suburbs will experience the greatest delay today, and will experience even greater delay in the future,” said Ron Milone, director of the Metropolitan Washington Council of Governments Travel Forecasting Program.

The average delay for trips to the inner suburbs of Fairfax, Montgomery or Prince George’s counties is projected to go from 13 minutes to 19 minutes. Both today and in 2040, trips within or between the three counties are believed to be the most common in the region — about 40 percent of all trips.

Milone expects a significant regionwide increase in the number of people walking, biking or taking trains or buses to work, but driving alone is still projected to be the most common way to get around under his 2040 models. Milone said a key driver of increased traffic is expected to be people taking more trips.

With a significant number of jobs expected to still be in D.C., Arlington or Alexandria, the commute to the core of the region is still expected to remain key to congestion.

That means either the region needs to invest in improvements for transit options in the region’s core or boost the amount of housing closer to jobs that people can actually afford, Transportation Planning Board consultant Bob Griffiths said.

“[Frederick County] is a good example of an outer suburban jurisdiction that has concentrated employment and housing in the City of Frederick, that more of the workers are able to both live and work in that jurisdiction,” he said.

These travel estimates do not include Howard, Anne Arundel, Carroll or St. Mary’s counties in Maryland or Stafford, Spotsylvania or much of Fauquier County in Virginia. The estimates are a best effort to account for potential changes in technology and work schedules.

“The commuting patterns are complex and … they change relatively slowly,” Griffiths said. “What if the best we can hope for is to keep plodding along?”

The long-range task force is supposed to be coming up with solutions to help the region ease projected traffic issues, but last week the group made up of elected and appointed state and local leaders and transportation experts worried that real solutions may be too difficult.

“What if there isn’t a game changing scenario? What if … the best we can hope for is to keep plodding along and try to use our local land use plans to drive people to where we want them, which hasn’t always worked well for us, because the circumstances don’t exist in which you could actually make … massive change to a system that is deeply embedded and is trapped within the 17 local governing bodies?” Prince William County Supervisor Marty Nohe said.

It has worked in some parts of the region such as Arlington, where development is centered on the county’s two Metro corridors.

The Transportation Planning Board, a broader group of regional leaders, set up the task force to make these stronger policy recommendations and to identify the most important projects for the long-term functioning of the region.

Typically, the planning board has simply approved transportation projects that have been proposed by state or local governments rather than delving into specific policies, such as land-use, that came up in the task force meeting.

“One of the presumptions of the whole exercise is that we are moving away from just projects,” task force chair and Arlington County Board Chair Jay Fisette said. “What’s the big project we can build that solves the problem? It doesn’t exist.”

While Fisette hopes for incremental change, he hopes that the Transportation Planning Board could set rules that would require local jurisdictions to commit to denser development around transit stops before the board approves projects for construction.

Metro Director of Planning Shyam Kannan said the lack of affordable housing where jobs are due to zoning restrictions, such as the height limit in D.C., force many people into long commutes.

“If all we’re doing is circling around a land use problem that said ‘we want the jobs, but housing can go elsewhere and especially affordable housing and especially tall housing,’ we’re going to have this [traffic] problem,” Kannan said. “This doesn’t work without a severely difficult and unfortunately necessary look at land use and zoning”

If the Transportation Planning Board is responsible for approving plans and spending, it must also have the power to say yes or no based on the surrounding development plans, Kannan argued.

As part of the planning for the Purple Line in Maryland, which is not associated with Metro, Montgomery and Prince George’s counties have laid out development plans around stations.

Nohe and Fairfax County Supervisor Cathy Hudgins questioned whether all of the region’s local governments would really go along with major policy changes set down by a regional body.

“Is my jurisdiction able to make the changes in our local policies that fit the game changing policies and strategies that this body would come up with? I’m not sure the answer is yes,” Nohe said.

Gaithersburg City Councilmember Neil Harris would settle — for now — for an answer to one not-so-simple question that could help the region figure out what can actually get done.

“What’s it going to take to fix this? What’s the price tag? How deep is the hole that we’re in? Because I think we’re digging a hole that gets deeper every year,” he said.