Va. gets 2 bids for outside-Beltway toll lanes on I-66

The bid deadline had been extended twice, but Aubrey Layne told WTOP Tuesday that the two interested teams submitted bids in time that include creative alternative designs – which, in some cases, could reduce costs.
Listen now to WTOP News WTOP.com | Alexa | Google Home | WTOP App | 103.5 FM

VIENNA, Va. — Two private bids to build and operate toll lanes on Interstate 66 outside the Capital Beltway appear to meet Virginia’s terms to limit state subsidies for the lanes, the state’s transportation secretary said in an interview.

The bid deadline had been extended twice, but Aubrey Layne told WTOP Tuesday that the two interested teams submitted bids in time that include creative alternative designs — which, in some cases, could reduce costs.

“I think the private sector really came up with some pretty cool designs and some innovative thinking, which is great,” Layne said.

He did not want to elaborate ahead of the selection of a preferred bid, which Gov. Terry McAuliffe is expected to announce next month.

Both bids appear to have met the state’s terms requiring no more than a $600 million contribution from the commonwealth, as well as funding for transit options for commuters who do not want to pay to use the lanes.

While the option for a more traditional public construction contract remains, the private bids are expected to prevail. The project will lead to two Express Lanes in each direction between Gainesville and the Beltway by 2021.

The variable tolls will be charged 24/7, except for vehicles carrying three or more people and an E-ZPass Flex flipped to High Occupancy Vehicle mode. 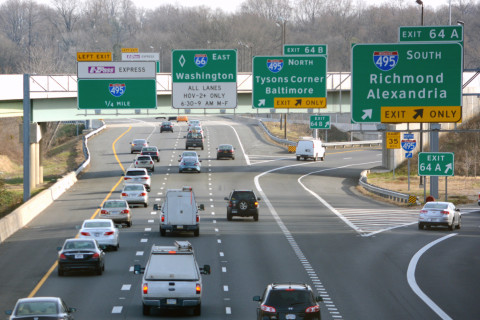