The Fairfax County Board of Supervisors is concerned about noise and air quality impacts if trucks are allowed on the new toll lanes. The board also says the public hasn't had a chance to weigh in on the proposal, which could also lead to higher tolls, members argue.
Listen now to WTOP News WTOP.com | Alexa | Google Home | WTOP App | 103.5 FM

WASHINGTON — Just before plans are solidified for new toll lanes on Interstate 66 outside the Beltway, the Fairfax County Board of Supervisors is asking the state to keep trucks out of the lanes due to concerns about toll rates and noise.

A letter to Virginia Transportation Secretary Aubrey Layne notes that reviews and public hearings assumed there would not be trucks in the lanes, and the option for private companies to include a provision for trucks was only added in late July.

There is a particular focus on the Vaden Drive ramp near the Vienna Metro and Oakton High School.

“The Board is requesting that the Commonwealth reconsider this decision,” the letter stated. “Potential impacts to the communities adjacent to the 1-66 Express Lane corridor need to be evaluated, especially the anticipated increase in noise and air quality impacts to nearby neighborhoods.”

An additional concern is higher tolls for people driving alone or with just one other person in the car if more trucks choose to use the lanes. Vehicles with three or more people and an E-ZPass Flex switched to HOV mode will ride free.

“One of our consistent comments on the I-66 project is that tolls be kept ‘reasonable,'” members of the board wrote in the letter. “This change will make ‘reasonable’ tolls less likely, since trucks will purchase capacity that otherwise would be sold to commuters.”

The board asks for public input on possible assistance for commuters if tolls do rise due to truck traffic.

“Until a comprehensive analysis is done addressing our concerns about the impacts of trucks using the HOT Lanes, the Board of Supervisors is forced to oppose this change to the project,” the letter stated.

Companies bidding to design, build and operate the two new express lanes in each direction are not required to include truck traffic in their proposals, which are due Oct. 4.

At this week’s Commonwealth Transportation Board meeting, Layne said the state is on track to select a preferred option by the time the state transportation policy board meets again later next month.

The next Commonwealth Transportation Board meeting will be held Oct. 18-19.

Inside the Beltway, construction is already underway on toll equipment that will allow solo drivers to legally pay to use the lanes at rush hour for the first time.

The new rules inside the Beltway are scheduled to begin next year with vehicles with two or more people in the car and an E-ZPass Flex switched to HOV mode riding free. The rush hour period where HOV rules apply will also be extended to four hours in each direction.

VDOT is separately working on a final deal with the details to convert the 395 HOV lanes to an extension of the 95 Express Lanes. 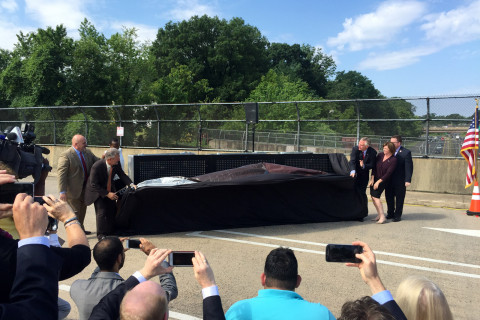 Feds give go-ahead on I-66 transformation