National Park Service and D.C. officials urge drivers who normally travel on Beach Drive as part of their commute to plan ahead for the long-term road closure that starts on Thursday.
Listen now to WTOP News WTOP.com | Alexa | Google Home | WTOP App | 103.5 FM

WASHINGTON — When a portion of Beach Drive in Rock Creek Park closes on Thursday, it’s unclear how tens of thousands of displaced cars and commuters will adjust, but officials want drivers to be ready for whatever happens.

The first of four planned closures along Beach Drive over the next three years will block 2.2 miles of Beach Drive between Tilden Street Northwest and the Rock Creek Parkway near Connecticut Avenue.

“We’re not perfectly certain about how traffic will redistribute in the coming days,” said D.C. Department of Transportation Director Leif A. Dormsjo Monday. “We will be flexible in making determinations about changes.”

Some strategies DDOT has planned to mitigate congestion include:

D.C. Mayor Muriel Bowser asked displaced motorists to respect the neighborhoods they might find themselves in unexpectedly and adhere to posted speed limits.

To receive text alerts related to the Beach Drive rehabilitation project, text the word “BEACHDRIVE” to 888777.

To assist drivers having to make detours, the National Park Service offers a location-based, mobile, responsive map to help drivers navigate around the closure.

“You’ll be able to go to the map wherever you are, wherever you are located and it will tell you the best detour route to get from where you are to where you’re going,” said Frank Young, deputy superintendent of Rock Creek Park.

During road construction, Young said access to trails along Beach Drive will remain open to cyclists, joggers and walkers.

A bit of trivia about Beach Drive — Young said it was originally designed in 1897 to provide recreational access to Rock Creek Park, which was the Nation’s third national park and its first urban national park. And more than 40,000 people use Beach Drive every weekend. 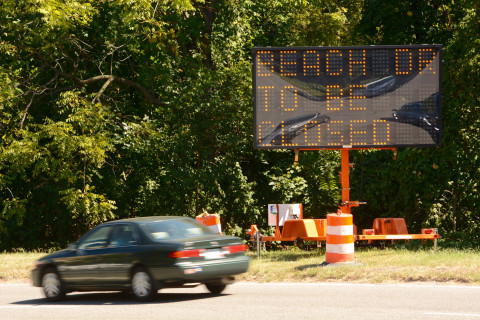