The Potomac River Freeway, or simply the Potomac Freeway, is a short, sunken highway than runs between the Roosevelt Bridge and the Whitehurst Freeway behind the Kennedy Center and Watergate Hotel.
Listen now to WTOP News WTOP.com | Alexa | Google Home | WTOP App | 103.5 FM
(1/3) 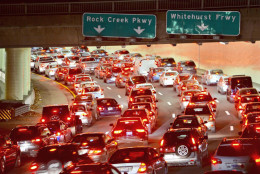 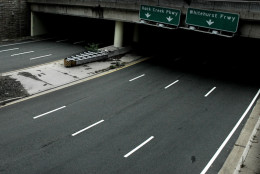 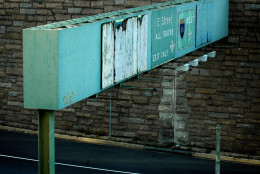 WASHINGTON — There is a freeway in Washington that is traveled by thousands of people daily and most of them have no clue what it’s called.

The Potomac River Freeway, or simply the Potomac Freeway, is a short, sunken highway that runs between the Roosevelt Bridge and the Whitehurst Freeway behind the Kennedy Center and Watergate Hotel. It forms the eastern end of Interstate 66 in the District.

WTOP conducted an informal survey at the northern and southern ends of the freeway on Wednesday between 2 p.m. and 4 p.m. We asked 76 local drivers who were stopped in traffic what road they were on. Of those, 72 — nearly 95 percent — either didn’t know or misidentified the road.

Only four drivers correctly identified the road by its name
or its number, I-66.

Of the 45 drivers who were stumped, many admitted that they drive on the Potomac Freeway every day without knowing what it’s called.

Most drivers who ventured a guess thought the road was the Whitehurst Freeway, an east-west elevated highway that runs above K Street in Georgetown. Three drivers confused it for the E Street Expressway, an appendage of the Potomac Freeway that runs under E St. NW toward downtown Washington.

“I didn’t know it was called Potomac Freeway,” said a driver who identified herself as Patrice. “I thought I was on Whitehurst Freeway.”

“I drive this way every day,” another driver shouted out the window. “I have no idea what this street is called. There’s no signs anywhere. From the beginning to the end, there’s nothing, so I have no clue.”

There are no overhead guide signs to indicate the road’s name nor are there any roadside interstate markers displaying the route number. An old, corroded sign structure south of the freeway’s tunnel under Virginia Avenue shows an I-66 shield. There are two mystery signs that have been covered with plywood on the same structure for years.

The District Department of Transportation says there are no plans to upgrade the signage on the Potomac Freeway anytime soon.

The freeway is awkwardly situated in the city’s road network. It is the only semblance of a vast but never-realized interstate network planned through the West End.

As political and residential opposition to various highways swelled in the late 1960s, plans to merge it with a proposed Interstate 266 and the never-built Interstate 695 South Leg Inner Loop fell through.

Although the Potomac Freeway is less than a mile long, it carries more than 50,000 vehicles through Foggy Bottom every day — about the same number of vehicles that travel across the Arlington Memorial Bridge — according to DDOT.