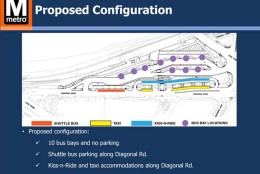 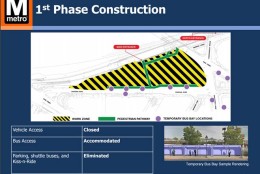 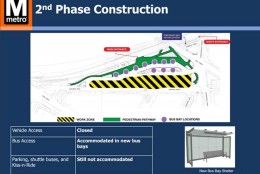 WASHINGTON — Major changes planned for the King Street Metro station would eliminate the station’s parking spaces and close the kiss and ride and taxi stand areas for two years.

The goal is to substantially increase the number of bus bays at the station from six to 10, which Metro Acting Chief Engineer John Thomas said meant something else had to go.

“Because of the limited space that we have down there, increasing one thing means something else has to go away, so the thing that ended up being sacrificed in the increasing of the bus bays is the existing metered parking,” he said.

Metro’s plan, which is expected to go to a public hearing this fall, includes approximately two years of construction split into two phases.

Beginning in early 2017, the entire area used today for parking, kiss and ride drop-offs, buses and shuttles would be shut down for 12-15 months, with the exception of a walkway to and from the Metro station’s entrance.

During that initial construction phase, bus stops would be on the adjacent streets. During that phase as well as the additional 9-12 months of the second phase required to build a taxi and kiss and ride area, there would be no official area for drop-offs and pickups.

Thomas said he expects the public hearing to focus on the “significant impacts” of the phased construction. He said there will be many signs to help guide people to the Metro station and bus stops.

“We are going to be basically doing the renovation while we’re living in the house,” he said. “It was impractical to just shut down the whole facility during the construction phase.”

While Metro hopes to encourage people to drive to Braddock Road or Eisenhower Avenue to drop off or pick up Metro riders, Alexandria City Councilmember and Metro Board Member Paul Smedberg pointed out at a Metro board committee meeting Thursday that people already use the street in front of the station for drop-offs today.

“So we’re sort of used to that pattern, most of it on Diagonal Road,” Smedberg said.

Many riders at King Street already access the station by bus, by shuttle or on foot.

The city plans to monitor pedestrian safety issues, but with more buses expected to serve the station in the future, Smedberg sees the project as a crucial need even with the short-term disruption.

“This is something that the city of Alexandria is very much looking forward to,” he said. “We’ve been discussing this now for a number of years; it is one of our two top transit priorities in the city, the other being the Potomac Yard Metro.”

When completed, the 10 new bus bays would be nearest to the station, with a taxi and kiss-and-ride area in a new loop off Diagonal Road and a shuttle bus area along Diagonal Road closer to Duke Street.

The city will take over maintenance of the area after construction is finished, which is expected to reduce Metro’s maintenance costs long-term. That would offset the approximately $20,000 per year Metro will lose in parking meter fees.

Weekend Road and Rail: Stops on the Beltway, I-66, Md. Beltway bridge work; Metro work on all lines

Toll rates approved for segments of Capital Beltway and I-270