WASHINGTON — The 95 Express Lanes in Virginia will run from the D.C. line to Fredericksburg in a few years after a major transportation improvement plan has received the green light to move forward.

A $165 million federal grant will help pay to extend the tolled commuter lanes and numerous other projects along the congested Interstate 95 corridor designed to ease traffic. And a second grant will breathe new life into the aging Arlington Memorial Bridge.

Currently the 95 Express Lanes run from just north of Garrisonville to just before the Arlington County line, where they become high occupancy vehicle lanes on Interstate 395. The state had previously announced plans to extend the lanes all the way to the Potomac River on the north and a bit further south into Stafford County. Tuesday’s announcement builds on those plans.

“We are also now going to extend the 95 Express Lanes 10 miles south, all the way to Fredericksburg,” Virginia Gov. Terry McAuliffe told WTOP.

The public-private plan, called the Atlantic Gateway Project, includes changes on the rails as well.

The governor said 14 miles of new train tracks will be added to allow for more VRE and Amtrak passenger trains to travel between Virginia and D.C.

“This is the biggest game-changer Virginia’s had in a very long time,” he said.

The $1.4 billion transportation project is able to move forward now that it was selected for the federal grant, which came in short of the $200 million Virginia requested.

The project will also pay for new commuter parking, expanded bus service, new pavement for driverless cars and the purchase of an abandoned rail line between North Carolina and Richmond that could eventually be used for high-speed rail service.

Construction will happen in phases.

A separate $90 million federal grant will help to extend the life of the deteriorating Memorial Bridge. In the past year, lanes have been closed to traffic and a weight limit enforced that has prevented tour buses from using the bridge.

The grant will help to address the outer spans of the bridge. The center span of the bridge will be repaired as federal funding becomes available.

Built in 1932, the iconic bridge carries 68,000 vehicle daily. If nothing is done to repair the spans, the bridge could be closed to traffic in five years, the National Park Service has said.

McAuliffe unveils plans to unclog I-95 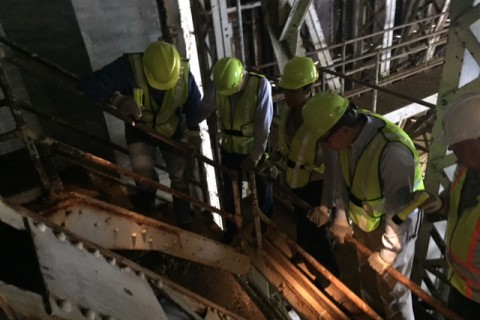