WASHINGTON — Work will begin soon on a $31 million design and construction project to extend the 95 Express Lanes further south into Stafford County.

The Commonwealth Transportation Board approved the contract Wednesday that will build another 2.2 miles of reversible lanes plus new entrances to and exits from the express lanes. The project is expected to ease backups that routinely build as traffic approaches the southern edge of the reversible lanes.

Construction is set to be completed by August 2018. The southbound exit ramp beyond Garrisonville Road is scheduled to open in late 2017 or early 2018.

Gov. Terry McAuliffe first announced plans for the extension on WTOP in November, but the project details have taken time to finalize.

When the work is finished, drivers on northbound Interstate 95 will be able to enter the lanes at a new entrance before Garrisonville Road or at the existing entrance.

Southbound drivers in the Express Lanes will be able to remain in the lanes for about two more miles before merging into the main lanes beyond Garrisonville Road.

Virginia transportation officials hope the change will cut down on delays in both directions and reduce weaving from drivers entering or exiting the lanes.

About 30 miles to the north, Virginia is also planning to convert the Interstate 395 HOV lanes in Arlington County into an extension of the express lanes. Construction is expected to begin in 2017 and the lanes will convert to express lanes in 2019.

Solo drivers have to pay a toll to use the express lanes. High occupancy vehicles can travel the lanes for free if they use an E-ZPass Flex.

Bill could lead to I-95 improvements for some regular backups 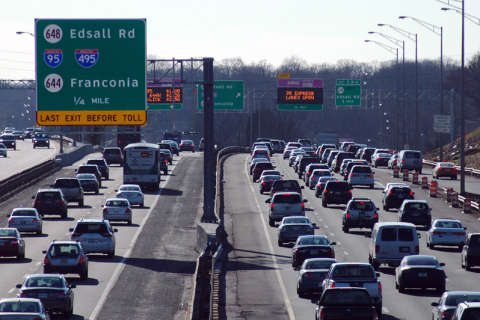