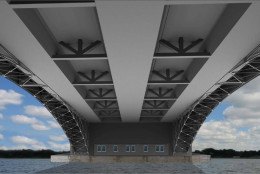 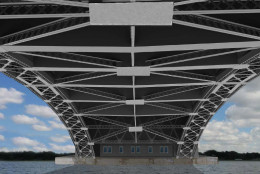 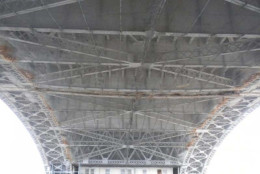 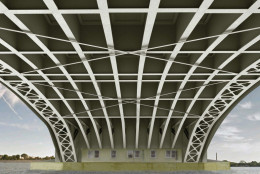 WASHINGTON – The National Park Service offered a first glimpse of the various plans to rehabilitate the Arlington Memorial Bridge Thursday.

The repair plans will maintain the multiple-arch design and look of the bridge but call to eliminate or refurbish the defunct drawbridge that sits midspan.

Four design options for the superstructure beneath the drawspan section of the Memorial Bridge were presented during the National Capital Planning Commission’s regular meeting.

The meeting comes one year after an emergency load restriction for buses was put into effect across the 84-year-old bridge. The park service says that if the structure isn’t rehabilitated soon, it could be closed by 2021.

The proposals vary greatly in how to rehab the drawspan, which is severely corroded and was decommissioned in the 1960s. Options would replace the drawspan with concrete beams, variable depth girders. or fixed steel trusses. Another option would refurbish the existing steel components of the drawspan.

All of the alternatives would address the drawspan and make needed repairs to the bridge piers, foundations and concrete arch spans. The outdated bridge deck would also be replaced. The sidewalks and the number of lanes would remain unchanged.

“For a majority of users and visitors, the general character and aesthetics of the bridge will not change under any of the alternatives. Views from the bridge from the shore or from a distance will not be changed significantly,” said Matthew Flis with the National Capital Planning Commission.

Flis said that the most of the proposed changes would only be visible to a limited number of locations on shore or to those on the river below.

The first alternative calls for replacing the existing drawspan with a new fixed-span supported by concrete beams. The sides of the new span would be visually similar to the existing bridge but the underside of the bridge would be defined by the straight, pre-cast concrete girders.

A second option would replace the old, rusted drawspan with a new, fixed-span comprised of welded steel trusses.

“In this alternative, the underside of the replacement span would visually replicate the existing bridge,” but Flis says the complexity of the structure would pose additional maintenance issues in the future. He also says that water runoff would continue to be a problem.

“Alternative 3 would preserve elements of (the) existing bridge however the continued challenge of maintaining the existing span design may lead to more substantial operation issues over time,” Flis says.

While the third proposal preserves the bridge’s visual appearance, a 2015 bridge inspection revealed that 20 to 25 percent of its steel was no longer usable and Flis noted there could be continued challenges in maintaining the existing design over time.

The final proposal, a variation of Alternative 1, calls for a replacement of the old drawspan with a new, fixed-span comprised of variable depth steel girders. The new proposed bridge deck would stretch from sidewalk to sidewalk, eliminating significant drainage issues at the curb lanes that have led to further disrepair.

Initially, the park preferred Alternative 3 until the existing steel trusses were found to be deteriorating more rapidly than expected.

Flis also noted that the fourth option could be completed without a full bridge closure, unlike Alternatives 2 and 3. The initial construction costs would be $30 million less than the third alternative.

The costs of the proposals range from $225 million to $280 million. The park service has a $3 billion annual budget but only allocates about $268 million for transportation projects nationwide.

In April, NPS and District leaders applied for a FASTLANE grant in a last ditch effort to secure additional federal funding to rehabilitate the bridge.

The bridge carried more than 51,000 vehicles per day in 2014, according to recently released numbers from the District Department of Transportation.

EDITOR’S NOTE: This story has been changed to reflect the correct profession of Matthew Flis.