Metro’s rail system turns 40 on Sunday, with an uphill climb to draw riders back to the system that has transformed the region.
Listen now to WTOP News WTOP.com | Alexa | Google Home | WTOP App | 103.5 FM
(1/5) 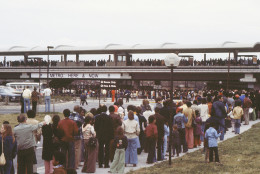 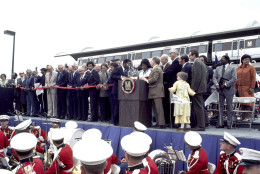 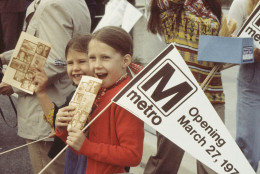 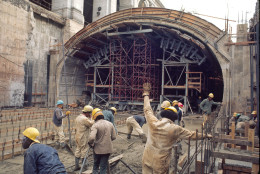 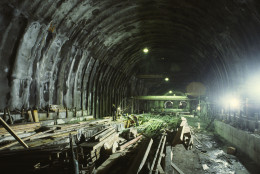 WASHINGTON — Metro’s rail system turned 40 on Sunday, with an uphill climb to draw riders back to the system that has transformed the region.

Even the groundbreaking for the system was delayed more than a year from 1968 to 1969 over jurisdictional funding disputes and other issues. Eventually, the rail system opened with free rides March 27, 1976 to and from the first five Red Line stations between Rhode Island Avenue and Farragut North. The first fares were paid two days later, and Dupont Circle station opened in January of the following year.

Since then, Metro has had ups and downs, with the latest events over the last several years raising questions for riders about safety and other issues, even as Metro expanded with the first phase of the Silver Line to 91 stations along 117 miles of track.

Last week, Metro General Manager Paul Wiedefeld shut the entire system down for emergency electrical inspections after a fire he called “disturbingly similar” to the one near L’Enfant Plaza last year that led to Carol Glover’s death. Metro found 27 significant issues, including three power cables that were so frayed trains would not have been running past them if inspectors had been aware of the issues.

On Friday morning, a fire Metro referred to as caused by “debris” shut down the Orange and Silver Lines between Rosslyn and Ballston for just over an hour. Initially, it did not appear to be related to the power issues addressed during last week’s shutdown.

Wiedefeld says Metro needs to dig out of a hole caused by maintenance being put off for too long, just to return to what should have been a regular level of recurring maintenance and repairs. It means more station shutdowns or other changes could be announced within the next few months as part of an overhaul of Metro track work soon.

Wiedefeld, who took over this fall, and Mort Downey, who served as Metro Board chair last year, cannot be certain that promised track work required or recommended by federal safety investigators has been done correctly, even as riders have experienced years of single-tracking and other delays following the deadly 2009 Red Line crash near Fort Totten.

“If we’re going to have confidence in what’s going on, I think we have to understand: how did we get to that circumstance? How do we get assurance that this time we’ll do it and do it right?” Downey says.

With big impact on region, is Metro ready for truth?

Metro Board Member Harriet Tegoning, who has worked in planning and is now at the Department of Housing and Urban Development, sees one of Metro’s biggest impacts in the way it has shaped the region.

“So much of our region now has really oriented its commercial development [and] a lot of its housing around the spine of Metro and all the other great transportation choices we enjoy in our region … a lot of them are really enabled by the basic access that we have through Metro,” she says.

And Tregoning believes the era of Metro safety problems being swept under the rug are coming to an end.

Metro is far from the first American transit system to face funding, safety or infrastructure issues.

San Francisco’s BART system, built around the same time as Metro, is dealing with some similar problems today.

Northern Virginia Chamber of Commerce President and Metro Board Member Jim Corcoran points out that New York’s subway system faced issues from maintenance put off for decades, graffiti and crime concerns to major financial shortfalls in the 1970s and 1980s.

“You need proper management of any organization,” he says.

“Family businesses have trouble passing from one generation to the next, there has to be careful reinvestment in whatever the organization is, and some of those things are coming to fruition now,”

Metro has promised skeptical riders for years that it would create a “safety culture”, only for another incident to crop up, or federal safety inspection to reveal new problems.

Metro Board Chairman and D.C. Councilmember Jack Evans says Metro needs to show it can really follow through, in order to justify his calls for more regional funding.

Beginning next week, Wiedefeld says Metro will have 96 of the new 7000 Series cars available for service — enough for 12 trains.

For the first time, Metro’s oldest cars that have been in service for all 40 years of the system’s existence are beginning to be taken to the scrapyard.

The cars scrapped so far have already been out of service for a while, but with more of the new railcars coming, the 1000 Series cars still in service will finally begin to be phased out within the next month or two.

The National Transportation Safety Board said after two trains collided at the Woodley Park Station in 2004, the cars needed to be reinforced or taken out of service because of the risk they posed in a crash. Those cars were among the most severely damaged in the 2009 Red Line crash near Fort Totten where nine people died, and the NTSB renewed its recommendation to take the cars out of service.

Metro had planned to begin phasing out the cars earlier than this year before delays in delivery of the new 7000 Series cars.

Corcoran sees the increasing number of new trains, which could now be about 10 percent of rush hour service, as a sign of other Metro improvements even as riders question whether the 40-year-old system is facing too much of a strain.

“My wife says that to me as well,” he says. “I’m married 35 years this year, so close to the age of Metro. Things change, things have to evolve and it’s a more mature system, it’s not as new … [with more new 7000 Series cars arriving] you’re going to start to see the fruition of these investments that are being made, and that will continue. It has to continue for the region.”

The Federal Transit Administration has separate temporary oversight of Metro, including directives that cover some of the NTSB recommendations made over the last decade or so. U.S. Transportation Secretary Anthony Foxx has taken a particular interest in the failure of Maryland, Virginia and D.C. to set up a truly independent oversight agency that is supposed to take over from the FTA.

The region’s leaders have promised a number of times that the Metro Safety Commission would be established, with the latest promise that the necessary laws will be in place by next spring.

The FTA says Metro is making some progress to address issues found during a federal safety inspection after last year’s deadly smoke incident near L’Enfant Plaza, but that there are still additional major issues that need to be addressed with tracks, red signal violations and trains or other equipment simply being allowed to roll away in rail yards.

This week in history

When Metro shut down for emergency inspections last week, it was the first time the entire rail system had closed for anything other than severe weather.

“I believe that the shutdown was a seminal moment, it restored some confidence in Metro,” Evans says.

“Clearly it was the right decision to make in light of what we found.”

In addition to the major safety issues, the inspections focused on Metro’s power cables and connections in tunnels found 338 other more minor issues that should have been addressed through regular maintenance.

Outside the Tenleytown Station, Robert Brookings waits for an elevator in a bright yellow construction vest on his way home.

“I feel comfortable, it’s OK, it gets me to work every day,” he says, reflecting on Metro’s challenges. “But also its convenience — when it works.”