Handicapped parking may not be free in D.C. too much longer

WASHINGTON — A D.C. Council committee heard testimony Wednesday on a proposal that would establish handicapped-only meters in the city, but would end free parking and the incentive to create counterfeit handicapped placards.

Red-top meters specified for disabled patrons were installed across the city last summer, but the council put a halt to plans to begin the program because the D.C. Department of Transportation did not consult with the council on it.

But there is mixed reaction to charging for the handicapped spots because some people who are elderly or disabled live on a fixed income.

“Frankly, I think it should be criminal,” says Lewis Wolf, who has an amputated leg from a blood clot. “If someone fabricates a placard, I think they should go to jail. In many cases, they probably could afford to pay a $500 fine.”

He says limited incomes restrict some handicapped and elderly drivers.

“There are a lot of people who can’t afford parking garages and can’t afford the current parking rates.  They’re on a limited income. It’s discriminatory. People with disabilities and the elderly are an afterthought,” he adds.

Evans expressed similar concerns and wondered whether the price was worth the impact on the disabled community. Councilmember Mary Cheh didn’t commit to charging for red-top meters, but explained why fraud is an important issue to combat.

Carol Tyson, director of disability at United Spinal Association, says she is OK with paying to park. She points out that different people in the disability community have different opinions on the issue.

“People with disabilities need to be integrated into society as much as everyone else. Where some people might have to pay, I am happy to pay,” she says.

Department of Public Works Director Bill Howland said he believes stings are the best way to crack down on placard abuse or misuse.  He told lawmakers that most offenders are commuters misusing legitimate placards obtained in Maryland and Virginia.

“I don’t believe they are faking anything at all. But it’s difficult for us to tell because we’re looking through glass,” says Howland.

He says it’s hard to enforce because drivers often have ready-made reasons for having the placard on their vehicle to sidestep any misuse allegations.

Another question that came up was the maximum amount of red-top meters that can be placed in busy corridors. Tyson said she wants four red-top meters on each block: two on each side of the street and one on each end near the ADA-accessible sidewalks.

“I think in my verbal testimony, I expressed some concern about a maximum. The idea should be a targeted ratio of meters with administrative flexibility for the department to make changes based on the space, driven by matters of accessibility. We’re getting a lot of good feedback from our disability community about how this can be applied thoughtfully and that was not necessary the process before. I think a lot of these decisions were made in a vacuum without input,” says District of Columbia Department of Transportation Director Leif Dormsjo.

DDOT recommends that charging for red-top meters only be limited to the downtown corridor because it is the section of the city where the most abuse or misuse occurs, such as near L’Enfant Plaza. It would not apply in places such as Georgetown or other parts of the city for now.

“We have a lot of work left to do. We have to consider whether to keep this in a particular district or not,” Cheh says. “We have to consider whether or not to require payment. Payment would take away the incentive of outright fraud. We can also look at targeted enforcement where we get DDOT, DPW and MPD to go out and intercept people with a reasonable suspicion that they’re cheating.”

Cheh adds that she wants to take this slowly. She was asked whether we could see a red-top meter program begin before the end of the year.

“I would want to err on the side of making sure everyone knows what is coming, understand it and has an opportunity to offer suggestions — then we put something in place,” she says.

Parking meters may be coming to Friendship Heights 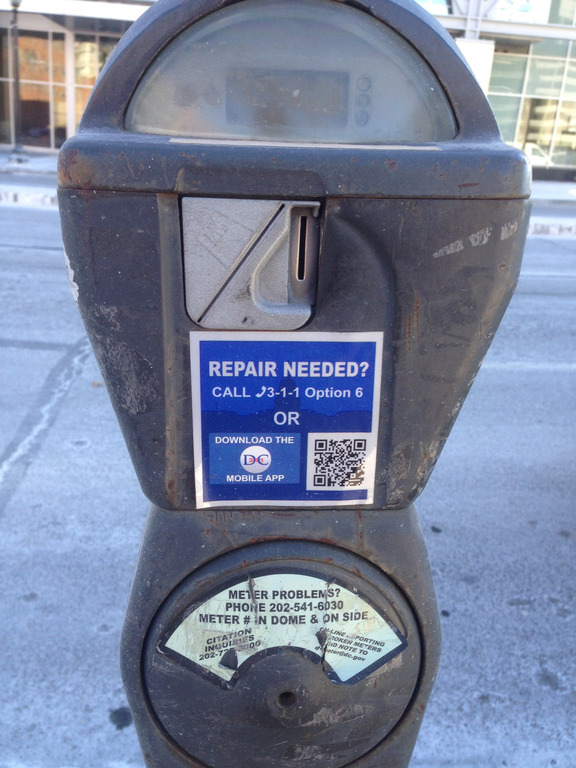 Can you park at a broken parking meter?