Dr. Anthony Fauci, the chief medical adviser for President Biden, said that while COVID booster shots are increasingly important for vaccinated Americans because of waning immunity, the administration hasn’t given up on trying to persuade the unvaccinated to get their first shot.
Listen now to WTOP News WTOP.com | Alexa | Google Home | WTOP App | 103.5 FM

Dr. Anthony Fauci, chief medical adviser for President Biden, said that while COVID-19 booster shots are increasingly important for vaccinated Americans because of waning immunity, the administration hasn’t given up on trying to persuade the unvaccinated to get their first shot.

Fauci, the nation’s leading infectious disease expert, told WTOP in a wide-ranging interview that while the country is coming down from its summertime peak of coronavirus cases, it’s now reached a plateau of around 70,000 to 75,000 cases per day and 1,000 deaths per day.

The country is also beginning to see more hospitalizations among the vaccinated, Fauci said.

“Although the vaccines are very effective in preventing severe disease and hospitalization and death, as time goes by, particularly among the elderly — and likely sooner or later among everyone — we’re starting to see a diminution and a waning of protection,” he said.

“That’s the reason why we’re really pushing boosters, namely the third shot of an mRNA vaccine or the second shot of a (Johnson & Johnson),” he said, noting that research from Israel has shown that boosters “dramatically diminish” the likelihood of severe illness or death.

For now, however, the U.S. Food and Drug Administration is only recommending boosters for certain groups of people, including the elderly, people with compromised immune systems and those who work in certain high-risk jobs.

But some states have begun recommending boosters to anyone over 18.

Fauci said the FDA is “as we speak” reviewing data to decide whether to expand their recommendation.

Asked if he supports such a move, Fauci said, “personally, myself, as a physician and as a scientist and a public health person, I think that uncomplicates things and that’s the way we should go, although I respect the decision of the FDA and the CDC and I anxiously await what their decision is going to be.”

Don’t give up on the unvaccinated

But boosters are only one part of the equation. Fauci stressed that inoculating the roughly 60 million Americans who have refused to get a COVID-19 vaccine is still the main goal, followed by vaccinating children and then administering boosters.

But if people haven’t received a vaccine by now, is there really anything the government can do to convince them at this point?

Fauci believes there is, pointing out that the unvaccinated are not a monolithic group.

Those trusted messengers could be members of the clergy, sports figures and others who can appeal to their sense of responsibility and “convince them by answering their valid questions about why it’s important to get vaccinated.”

And if that still doesn’t work?

“That’s where mandates come in,” he said. “We would like to not have to mandate vaccines, but when you’re dealing with what’s good for the community, sometimes you have to sacrifice people’s individual feeling that they can only make decisions just for themselves. When you’re dealing with a pandemic, your decision affects not only you, but it affects other people.”

He added that people should look at the pandemic like a war: “When you’re at war, sometimes you have to sacrifice your own personal wants and desires … for society.”

Numerous Republican-led states, however, have launched legal challenges against President Biden’s mandate that any business with 100 or more employees has to require vaccines or testing by early next year.

Despite the pushback on vaccine mandates, Fauci said “they work,” citing the examples of large companies such as United Airlines and Tyson Foods, which have vaccinated almost all of their workforce.

Yet it’s not just vaccine mandates that have caused a stir. Many people are still against having to wear masks.

That includes people in highly-vaccinated jurisdictions like Montgomery County, Maryland, where critics of mask mandates have questioned relying on CDC metrics such as case counts given that hospitalizations and deaths remain relatively low.

But Fauci said that looking at the number of COVID cases is “absolutely” the right metric. Citing the 70,000 to 75,000 cases being recorded each day, Fauci called it “an absolutely unacceptably” high rate.

“As long as that level is there, individuals, even those who are vaccinated, when they are in indoor congregate settings and do not know the status of vaccination in the environment … they need to wear a mask,” he said. “I’d love to not wear a mask, but when you’re in the middle of a pandemic, that’s no time to say let’s throw the masks away.”

Masks are especially important in schools because many parents are still weighing whether to vaccinate their children now that a lower-dose Pfizer vaccine has been approved for ages 5 to 11.

Fauci hopes parents opt for the vaccine because while children do not get as seriously ill from COVID as adults do, they’re still at risk.

“There have been 1.9 to 2 million infections, 8,300 hospitalizations and about 100 deaths among children who are 5 to 11. That is much more than the deaths in that group of influenza, and yet we vaccinate children for influenza,” Fauci said.

With the holidays approaching, family gatherings raise uncomfortable questions about vaccines and masking. Fauci, though, said it’s pretty simple. If, for example, an uncle who hasn’t been vaccinated wants to come over for Thanksgiving, “you tell him either get vaccinated, get tested or don’t come to dinner.”

It’s a bullish stance, but Fauci insists he’s not a bully when it comes to pandemic restrictions. 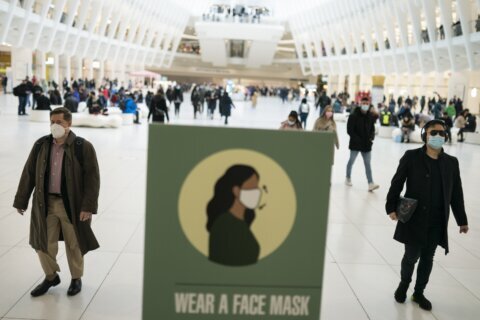