Virginia is sending 8,000 additional COVID-19 vaccine doses to District hospitals as early as next week, D.C. Health Director Dr. LaQuandra Nesbitt said at a news conference Monday — more than the 6,825 vaccine doses the federal government has allotted for the nation’s capital.

The extra doses are meant to cover Northern Virginia residents who work on the front lines fighting the pandemic in D.C.

The collaboration happened over the weekend, Nesbitt said, and details are being finalized.

After front line workers are vaccinated, D.C. can focus on long-term care facilities.

“We have to be able to vaccinate individuals who are in the higher risk groups before we can move to Phase Two and Phase Three, where the general public is,” Nesbitt said.

She cautioned that the city cannot provide a timeline “in terms of what date, what weeks, we will get to the general public in Phase Three or when we will get to other risk groups in Phase Two because we simply don’t know how much vaccine we will get and when.”

Nesbitt added that the shipment from Virginia allows D.C. and its neighbor state to “activate a long-term care partnership.”

She added that the District is in discussions with Maryland for extra doses as well.

D.C. will have the ability to track the number of vaccine doses that come into the city and track who has been vaccinated. Additionally, they will be able to remind them of when their first and second dose is due.

Those numbers will be reported.

D.C. Mayor Muriel Bowser said that the Pfizer vaccine the city receives is 95% effective with two doses. She cautioned that there are some side effects of the vaccine, but they’re “normal.”

“It is expected that some people may have an immune response to receiving the vaccine, such as a sore arm or fatigue, headaches, muscle pains and chills. And this is normal and expected and revolves shortly after the vaccine has been administered,” Bowser said.

“So we want everybody to find the facts, get the facts, so that you can, with your health care provider, get any questions that you have answered.”

Right now, the vaccine is safe for those 16 and up. It’s unknown when a vaccine for pediatrics will be considered safe.

“We do not have significant data on the pediatric population, as it relates to safety and efficacy at this point, to be able to indicate when that population will begin to be vaccinated,” Nesbitt said.

Among the first to receive the vaccine in D.C. are five members of the city’s Fire and EMS department — including its chief, John Donnelly. The vaccinations are expected to happen this week.

D.C. Fire and EMS Lt. Keishea Jackson said that she initially had a lot of hesitation when it came to getting the vaccine.

“I was definitely one of the ones who was opposed to it, against it, was not going to do it,” Jackson said. “But you go through life, and certain situations come up in your life that will change you.”

She said she’s trying to “send also a message to Black and brown people that look like me,” adding, “It is my race that is dying at a high rate.”

A friend of Jackson’s since she was 10, a nurse, has become severely ill, she said. And she’s also worried about passing an illness along to her father since she’s often working during demonstrations in D.C.

“I can’t afford to do that anymore. I can’t, I can’t. So I have to step out on my faith and believe that I’m going to be fine. And that is my belief. That’s what I’m going to do. Again, it’s my race who is leaving here at an alarming rate.”

Lt. Joseph Papariello also emphasized the importance of getting vaccinated.

“Our biggest fear as providers is giving it to our patients and bringing it home to our families, and this is the first step in rounding that corner and preventing those things from happening, said Lt. Joseph Papariello.

Donnelly, the acting fire chief, said Monday that he learned last week that his department would be among the first to receive the vaccine as first responders. Members were surveyed about their participation levels for the vaccine, which he describes as being “optional but highly encouraged.”

“The members we’re engaging first are those members who are interacting with COVID … We’ve seen pretty widespread COVID with over 250 cases in the fire department,” he said.

Donnelly plans to have 140 people vaccinated per day until all the vaccine allotment is exhausted or there are no other members willing to be vaccinated.

One additional death was reported. To date, 716 D.C. residents have died from the virus.

Below are maps of cases by ward and neighborhood. 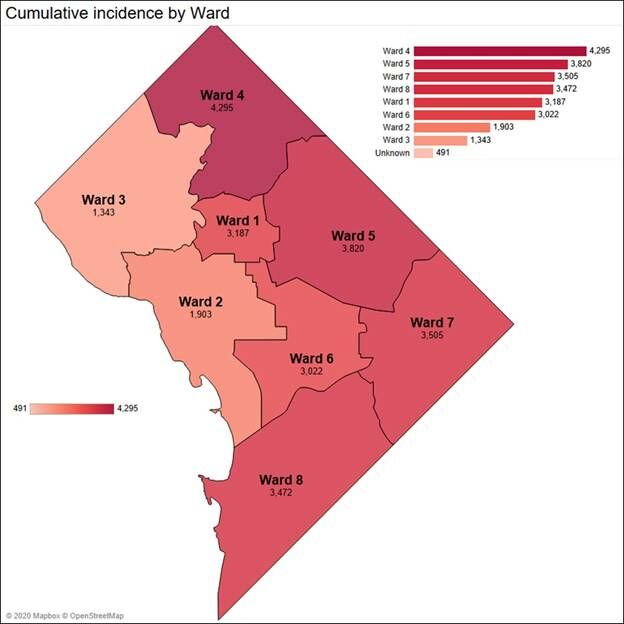 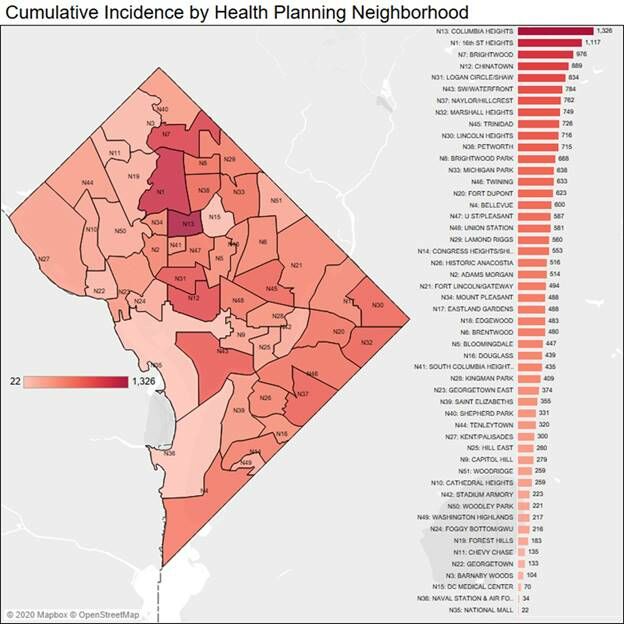