The sharp reversal after a banner 2021 for Wall Street has been particularly unsettling for those who have been planning to retire sooner, rather than later, and banking on a healthier stock portfolio to help fund their post-work lifestyle.
Listen now to WTOP News WTOP.com | Alexa | Google Home | WTOP App | 103.5 FM
(1/3) 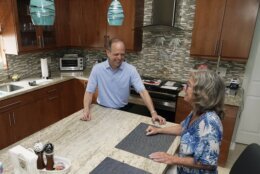 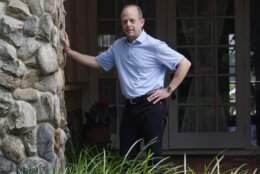 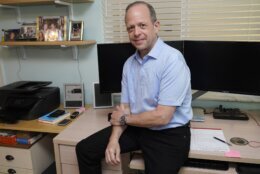 Americans on the cusp of retiring are facing a tough choice as they watch their nest eggs shrink: Stay the course or keep working.

A stock market slump this year has taken a big bite out of investors’ portfolios, including retirement plans like 401(k)s. The S&P 500, the benchmark for many index funds, is down about 17% since its all-time high in early January.

The sharp reversal after a banner 2021 for Wall Street has been particularly unsettling for those who have been planning to retire sooner, rather than later, and banking on a healthier stock portfolio to help fund their post-work lifestyle.

It doesn’t help that the cost of everything from gasoline to food is up sharply amid the highest inflation since the 1970s. And that the Federal Reserve’s recipe for fighting inflation — hiking interest rates — has heightened fears the U.S. economy will slide into a recession. All of that is bad news for corporate earnings growth, which is a key driver of stock prices.

The market skid has financial planners hearing more often from anxious clients seeking advice and reassurance in equal measure. They say some clients are opting to push back their retirement date in hopes that will buy time for their investments to bounce back. Meanwhile, retirees already tapping their investments may have to consider beefing up their savings with a part-time job or putting off major travel or spending plans.

“From late 2020 through 2021 we saw a wave of clients retire because of the large gains in the stock market and because they no longer wanted to work in the COVID ‘new normal’ work environment,” said Mark Rylance, a financial planner in Newport Beach, California.

This year, half the clients who discussed retirement opted to still retire, while the other half decided to hold off, he said.

Historically, the stock market has tended to deliver positive returns within a year following steep declines. But unlike younger investors who can ride out Wall Street’s sharp swings, workers closing in on retirement don’t have as much time to make up losses from hefty market downturns.

“I am a little afraid — I don’t want to work until I’m 70,” said Nancy Roberts, a librarian in Meridian, Idaho.

The 60-year-old is counting on her IRA to fund her retirement, which is a little over 4 years away. But the market decline has her feeling stressed.

“I do know I’ve lost money, but I’m trying not to freak out and look at it every day,” she said.

Many soon-to-be retirees are also terrified about inflation, which can be “devastating” over decades, said Mark Struthers, a financial adviser with Sona Wealth Advisers in St. Paul, Minneapolis.

“Compounding is magical when it is working for you, but devastating when it’s working against you,” Struthers said.

He advises retirees who are worried about getting by on their savings to be willing to cut back on spending on big-ticket items. That could mean taking a big vacation every other year, instead of annually, or waiting 10 years rather than 7 to buy a new car. Struthers also strongly recommends that retirees work part-time.

When stocks are in a downward spiral, investors traditionally shift money into bonds, which are less risky than stocks. But bonds have not been a refuge from losses lately. High inflation has made bonds, and the fixed payments they make, less attractive. One index of high-quality U.S. bonds has lost more than 9% so far this year.

Despite the market’s decline, investors like Mark Bendell in Boca Raton, Florida, are sticking to their retirement timeline.

The engineer decided early in 2021 that he would retire before the end of this year. The 62-year old reviewed his finances with a financial adviser and came away confident he would be able to live off his nest egg, which includes a 401(k) plan he’s been contributing to for about 34 years, a small pension, savings and Social Security. His wife Laurie, a teacher, plans to retire next year.

Not that watching the stock market plunge hasn’t been difficult.

“I have a stiff drink about a couple of times a week and then I take a look at my investments,” Bendell said. “I don’t look as much as when the market was climbing.”

Other than tweaking his 401(k) to make sure it wasn’t heavily invested in more speculative holdings, Bendell hasn’t made any major changes to his investment strategy since he started his retirement countdown clock.

“I stayed the course,” he said. “Trying to time the market doesn’t work, and I believe that.”

That approach, even during big market slumps, is typical among investors with 401(k)s or IRAs. A Fidelity Investments review of 24,000 retirement investment plans found that only 5.6% of people with a 401(k) made a change to their plan’s allocation in the first quarter. That compares to 5.3% in the last three months of 2021 and 6.4% in the first quarter last year, the company said.

The set-it-and-forget-it strategy helped, but didn’t shield investors entirely from losses this year. The average Fidelity 401(k) plan balance stood at $127,100 in the first quarter, down 2% from a year ago and off 7% from the fourth quarter.

Wall Street has been racking up gains more often than losses over the past decade. The market plunged 34% in March 2020 at the height of the pandemic lockdowns and climbed to new highs a few months later. Last year, the S&P 500 scored its third-best performance in the last decade, delivering a total return of nearly 29%, including dividends.

That’s why Americans who’ve long been socking away money into 401ks and other retirement investment accounts are likely still well ahead. Consider: The 1.7 million investors who have had a 401(k) through Fidelity the past 10 years saw their balance soar by an average of nearly fivefold to $383,100.

However, as of the end of 2019, only about 60 million employed Americans had a 401(k) plan, according to the Investment Company Institute, an association representing investment funds.

Previous years’ stock market gains are hard to keep in perspective when one’s retirement account balance shrinks by the day, however.

Having the bulk of her retirement savings in her IRA as the market declined has been “unnerving,” said Roberts, the librarian from Meridian.

So, she’s leaving it in the hands of her financial adviser, who sends her regular updates and has moved some of her money from higher-risk investments into mutual funds.

“They’ll move some money to cash if they have to, temporarily,” she said.

Roberts works four days a week at a library, spending the rest of the week caring for her elderly mother and taking her to doctor’s appointments. If she had to, she could try to work five days a week, though it would be a strain.

“I want to have some time to spend with my adult daughters, so I’m really hoping that my IRA hangs on,” she said.