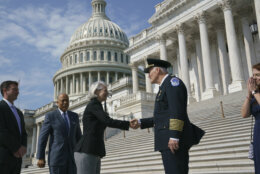 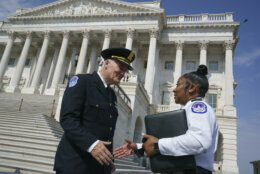 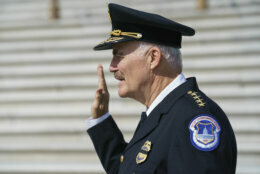 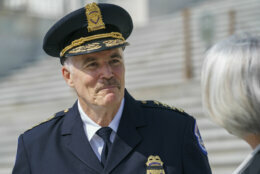 Newly sworn-in U.S. Capitol Police Chief Tom Manger seems to understand why reporters keep asking him why he didn’t just enjoy retirement after serving as the police chief of Fairfax and Montgomery Counties.

“I was doing consulting work. I was happy with my life, very happy being retired,” Manger said. Then, without prompting, Manger asked with a laugh, “What the hell’s wrong with me?”

Just as soon as he posed the question, Manger answered it. Turning serious, he explained, “It really goes back to Jan. 6,” Manger said. “It was the first time since I’d been retired that I wished I was not retired” said Manger.

He recalled how many times he and police chiefs from across the region had coordinated on public safety issues related to protests, inaugurations, even the terrorist attacks of 9/11.

“I really thought with my experience and my familiarity with this region, that I might be able to help this police department,” he said.

Once it was clear to Manger that he wanted to take the job, it was time to check in with the family.

Manger said he had a serious talk with his wife about what taking the job would mean.

“She was very encouraging and would have supported me in whatever decision I made,” he said. His wife came to the Friday morning swearing-in ceremony. “She knows this was the right decision for me and she’s very supportive.”

“It was like just putting on a pair of old shoes” he said. “I had this feeling for 42 years, took a break for a little bit — but it feels natural.”

The riots of Jan. 6 left the 1,800 sworn officers of the Capitol Police battered, and the entire department’s operations under scrutiny.

Hours into his job at the time of this interview, Manger said he’s still in the process of sorting out his priorities for the department, but made clear morale and staffing are among those issues at the top of the list.

However, Manger said, he won’t simply ask for more officers without a plan in mind. The Chief reports to the three member Capitol Police Board made up of the Senate and House Sergeants at Arms and the Architect of the Capitol.

At the same time, Manger said he wants the officers who protect the Capitol to know he wants to hear from them. Manger’s not a fan of simply telling officers that he has an open-door policy.

Manger said that question has allowed him to attack problems immediately and address issues that can eat away at morale. He also said he plans on popping in on training sessions or roll calls.

“If you want folks to know if you care about them, you’ve got to be there. And showing up and just being there means a lot, I think,” Manger said.

There will also be requests for equipment.

“There’s a whole list of recommendations having to do with equipment” he said.

The U.S. Capitol is unique in that it’s the seat of the federal government, and it’s a part of the Capitol Hill neighborhood.

Members of Congress expect to be able to carry out the people’s business in safety, and the public expects to be able to access the building and grounds for visits as well as protests, and locals want to be able to enjoy the beauty of the grounds.

Manger said he doesn’t want the U.S. Capitol to be turned into a fortress.

Making the Capitol complex a safe place, said Manger isn’t solely up to him. He explains that he’s part of a team, made up of the Police Board.

“Look, there’s going to be enhancements — no question,” he said. “Some of them might be invisible to the public, some of them might not be, but I think there is a general sense that this is a building and an institution that we want to remain accessible.”

Manger, who is 66, was born in Baltimore, grew up in Montgomery County, and served as chief in counties bordering the District of Columbia. And he’s still in awe of the building that houses Congress. He can see the gleaming white dome from his office.

“The view from this office is majestic — it’s just amazing.”