Md. woman loses her unborn child and leg, but not her fight 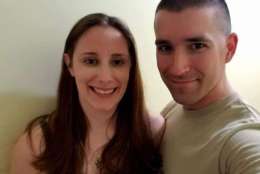 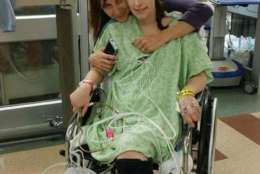 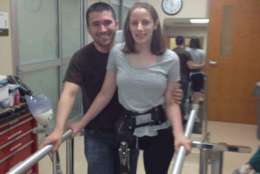 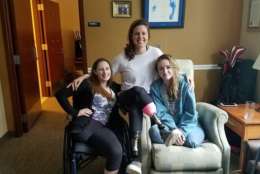 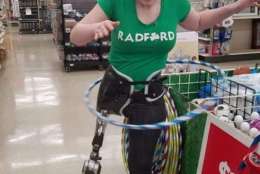 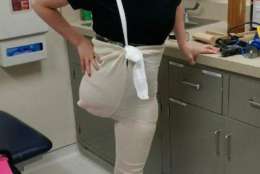 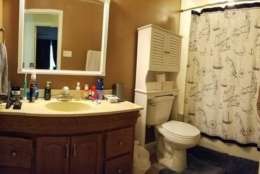 WALDORF, Md. — Twenty-nine-year-old Katie Feeney of Waldorf is a military spouse, but she’s the one who’s been at battle for nearly three years.

Katie and her husband Patrick, a staff sergeant in the Air Force, were expecting their first child to arrive on Valentine’s Day 2015. They were living in California at the time.

But one day in October of 2014, when she was six months pregnant, Feeney went to the hospital with unbearable abdominal pain.

“They were thinking the whole time it was a baby problem, that there was something wrong with my uterus. (Also) they thought I was suffering from a pulmonary embolism, but I wasn’t,” she told WTOP.

She actually had a perforated colon, which had led to infection and sepsis.

To this day, Feeney does not know for sure what caused the perforation.

“When they went in to do the C-section, it was a catastrophe. They had to revive me four times. I coded four times. The first time was for 45 minutes. My heart shut down. My kidneys shut down. My liver shut down,” Feeney said.

She had to go on full life support, and tubes were placed in the large arteries in her legs.

But there was a problem with one of the tubes, and part of Feeney’s right leg had to be amputated.

When she woke up after multiple surgeries, Feeney didn’t know what had happened.

“I have all these tubes coming out of me and everybody’s so afraid to tell me about my leg. They had told me I’d lost my leg, and at that point I’d only lost it below the knee,” she said. “So I’m looking down and I can see the upper part of my leg, and I’m like, ‘I have no idea what you guys are talking about. My leg’s still there. You’re crazy.'”

“I remember having to be told that my son didn’t make it, and I wasn’t pregnant anymore. That they’d gone ahead and removed him,” said Feeney, who then struggled with guilt.

“I went through a process where I felt like it must have been God telling me I wasn’t meant to be a mother, I wasn’t a good enough person,” she said.

Today, they are still working through their grief, but things are looking up.

After Feeney left the hospital, she and her husband moved back to the D.C. region — where they both grew up — in order to meet Feeney’s medical needs.

She is learning to walk with a prosthetic leg at Walter Reed National Military Medical Center.

That’s where, by chance, Feeney met and became fast friends with fellow amputee Jessica Kensky, a survivor of the Boston Marathon bombings.

Kensky set up an online donation page to help the Feeneys pay for things such as special crutches and wheelchair-friendly upgrades to their home.

“I can’t just stand in the shower, I have to sit. But the insurance doesn’t cover shower modifications, so right now my biggest danger is our bathrooms,” Feeney said.

Kensky also put Feeney in touch with a driving instructor, and Feeney is driving again with a car that’s fitted with hand controls.

“That’s been a huge help to me and my husband because I have so many appointments. I have physical therapy, occupational therapy, I have amputee clinic, I’ve got orthotics, I’ve got prosthetics,” said Feeney.

Last summer, she went to the beach for the first time since her amputation.

“It was a bit of a rocky start, because I wore a bikini. I always wore bikinis before, and I’m obviously really scarred up. It was a little bit of a shock, some of the things that were said to me. I’ve had people tell me, ‘You should cover up. You should think about little kids. They don’t need to be traumatized like this’.”

Those negative reactions aren’t holding her back.

“I want to get back to some of the activities that I used to do. I was an avid hiker. I loved kayaking. I might not be able to run again, but I can do hand races on hand bikes,” Feeney said.

She regularly writes updates on the donation page, and is touched by the comments of others.

“The messages people are leaving on there just completely make my day. They just make me want to fight to get my independence,” Feeney said.

For the first time in a long time, she says she and her husband are feeling excited and hopeful for the future.

“I am so incredibly lucky to be here, and I don’t want to waste a moment of the second chance that I was given.”

12-year-old boy shot, killed while playing with a gun in Charles Co.