Chesapeake Conservancy and Terrain360 are using drones to give a bird’s-eye tour of historic shipwrecks in an inaccessible zone of the Potomac River.
Listen now to WTOP News WTOP.com | Alexa | Google Home | WTOP App | 103.5 FM
(1/6) 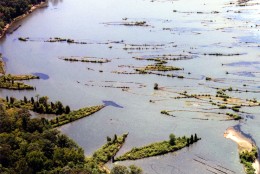 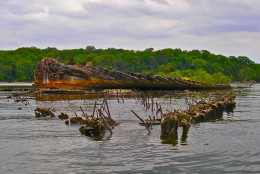 WASHINGTON — There’s a corner of the Potomac River known as Mallows Bay that is teeming with sunken vessels, what has been described as a “ghost fleet” of more than 100 wrecked ships.

Through the use of drones, the Annapolis-based nonprofit and Terrain360 created a virtual tour of the shipwrecks, which are in a portion of the river in Charles County, Maryland.

Jody Couser, a spokeswoman for Chesapeake Conservancy, said drones were used to capture aerial videos of the fleet. The footage was posted on the organization’s YouTube channel as a three-clip series Tuesday (Clip 1 | Clip 2 | Clip 3).

This isn’t the first time the organization has put this sort of thing together.

Couser said that Chesapeake Conservancy created this bird’s-eye virtual tour as a way to spark public interest in the site — a locale the group would like to be recognized as the first national marine sanctuary in the Chesapeake Bay. The organization said in a news release that such a designation would “protect this marine landscape for generations to come.”

Man who shot his way into closed bank arrested in Waldorf