Coronavirus News: Fairfax Co. votes to increase substitute teacher pay | Is it time to get a COVID-19 booster? Which one? | Local cases of COVID-19 | How many in DC region are vaccinated?
Home » Car Reviews » 2018 Jeep Wrangler Sport:…

WTOP's car guy Mike Parris said the new Jeep Wrangler carries on the tradition of a go-anywhere 4x4. Now in 2018 you don’t have to sacrifice as much to go with the Wrangler.
Listen now to WTOP News WTOP.com | Alexa | Google Home | WTOP App | 103.5 FM

So how do you remake an American icon? If you’re Jeep, you do so very carefully; this is the face of the company. It has the reputation as an off-road champion and an old-school SUV but these days luxury and refinement seem to be just as important to buyers. So can the Wrangler be a go-anywhere machine and a comfortable commuter ride?

I spent a week with the entry level two-door Wrangler Sport to be able to answer that.

While it has a starting price around $27,500, the fully loaded version is nearly $41,000 and a stripped down box the new Wrangler is not! The outside at first glance looks much like the previous version, but take a look for a few more seconds and you’ll notice this has a bit more of a modern look. There is the usual seven slot grill and the round headlights with a Jeep grill inside the light but it looks clean and new. Also the turn signals and parking lights have moved to the front fender flares. A few Jeep owners didn’t care much for that.

A Jeep Wrangler should be part transformer and the new Jeep obliges with the ability to take off the doors and fold the front windshield down with simple tools. If you park next to the previous Wrangler, you’ll see the front windshield has more of an angle, not sports car angles but maybe reducing the chance for a cracked windshield from debris. My tester Jeep also came with the $1,095 Black Freedom three piece hard top. This allows you to take off a panel over the driver, the passenger or the third panel which takes care of the back half of the Jeep. It also allows for a more hushed ride and a real rear window with a wiper. 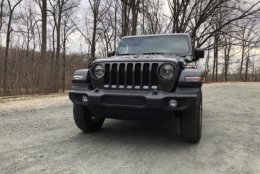 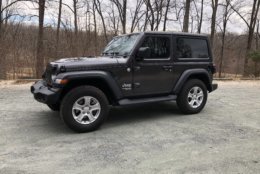 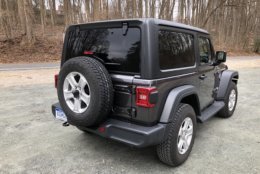 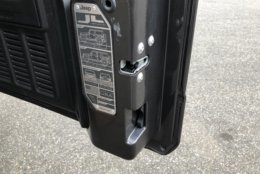 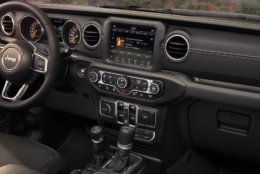 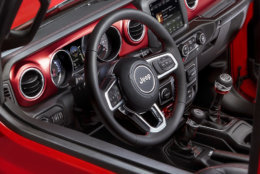 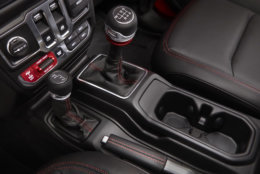 One huge improvement is inside the Jeep. Gone is the sparse look and feel. Don’t think to yourself, “I will drive around in the mud without doors and then hose it out at the end of the day,” it’s much too refined for that now. Hard plastics and Velcro is replaced by rich feeling soft materials and cloth seats would be a shame to get messy. Options like heated seats and steering wheel and remote start are available for automatic-equipped Wranglers.

There is impressive technology in the new Wrangler also, with an available Uconnect with a seven-inch touch screen that’s Apple CarPlay- and Google Android Auto-capable. The system works well. There is also available blind spot detection, rear park assistance and rearview camera which helps bring this Wrangler into the 21st century. The two door version is still strictly a four-seater with decent space in the back seat and a little more space for storage in the rear but don’t expect to haul large items. Once you store some roof panels back there, space will be limited.

Driving a Wrangler in the past was back-to-the-basics and crude for some. The new Wrangler is easier to live with. This is by no means a luxury car, but there is a more composed ride with less sawing at the wheel on the highway. The steering has a bit more feeling than before, with less lean in corners which inspires more confidence. You can fit this two-door version in some tight spaces.

Larger bumps seem not to upset the Wrangler as much and there’s less noise in the cabin. Power from the standard V-6 will be good enough for most, easily keeping up with traffic. Now there is an optional turbo four-cylinder engine for 2018 that also has power and promises better mpg. My tester came with a V-6 matched with the eight speed automatic which works very well, but I would save money and choose the manual transmission instead. Fuel economy for a week of mixed driving was 19.1 mpg of regular and a touch under the 20 mpg the sticker said.

The new Jeep Wrangler carries on the tradition of a go-anywhere four-wheel drive vehicle. Now in 2018 you don’t have to sacrifice as much to go with the Wrangler. With a vastly improved interior, updated technology and safety features this Wrangler will only be even more popular than ever. Just learn the Jeep wave. 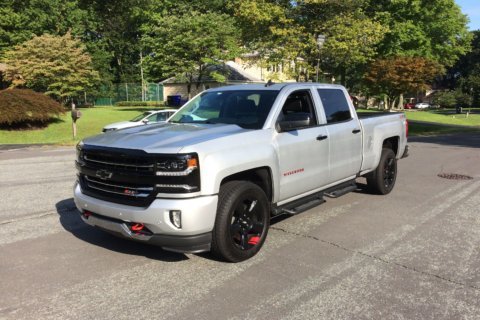 Chevrolet Silverado 1500: The best of both worlds 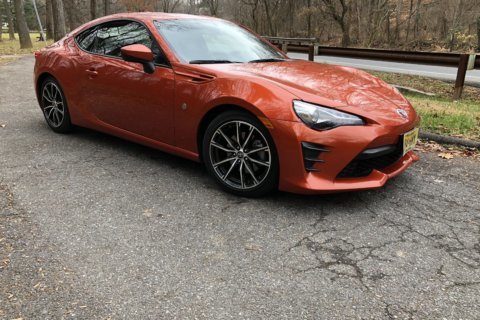