Car Review: Maximum space in a midsize crossover? The 2018 Chevrolet Traverse has plenty of room

WTOP car guy Mike Parris happens to own the old Traverse; this week, he test-drives Chevrolet's first update in nearly 10 years. Is the 2018 Traverse worth the extra coin?

WASHINGTON — Chevrolet’s first-generation version of the large midsize crossover has been around for nearly 10 years with only minor updates. For 2018, Chevy has decided it’s time to really get competitive in the midsize crossover class. Just about everything has changed or been upgraded for the 2018 model except the size and space inside.

The Traverse remains one of the largest midsize crossovers on the market. It’s rare when I can drive the old and new models back to back, but our family happens to have the first generation as our people mover. So is the 2018 worth the extra coin?

The old Traverse was launched during challenging times at GM — around 2008 and 2009 — so the interior, while large, wasn’t the best, with hard plastics even on the higher trim level. The slate has been wiped clean for 2018: The interior is a big improvement, with nicer materials used throughout the cabin.

The layout and look is modern, with easy-to-reach controls. The 3LT leather trim starts around $41,500 and is nicely equipped with higher quality leather-trimmed seats. The front seats are heated, with power adjustments for driver and passenger. One limitation of the leather package is the lack of a second-row bench option: You can’t seat eight and have leather. 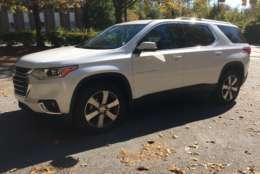 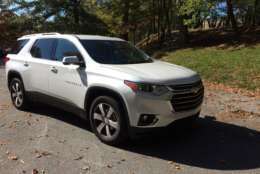 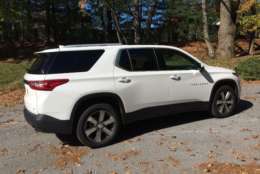 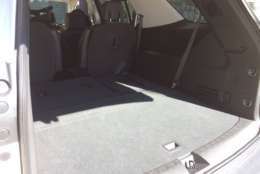 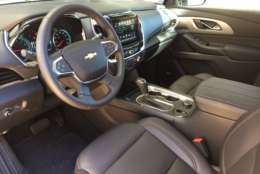 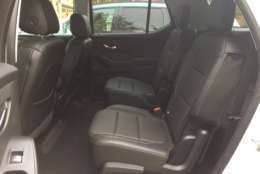 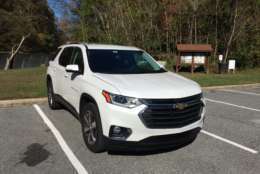 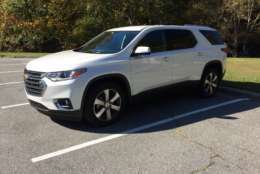 The rear seats are separate but comfortable chairs that fold easily for extra storage. The third-row bench has seating for three, and adults can use it, but there is less window area than the outgoing Traverse. If you don’t need the third row, you can quickly fold it flat for extra storage. This is a huge plus for this large crossover.

The MyLink system seems like it has improved, with a large eight-inch touchscreen and rearview camera with multiple views to help with parking. There are still knobs and some buttons for many of the controls. The Traverse comes with Apple CarPlay and Android Auto capability and has a 4G LTE hot spot and loads of USB ports — a boon for longer rides.

The new look for the 2018 Traverse is more macho, and takes its cues from truck styling. It looks blocky and tough — less like a typical family hauler. The front-end styling is brought up to date: A large angular grill fills up much of the front end, while fog lights add SUV style.

Parked nose-to-nose, the new Traverse looks smaller, but it’s not. There’s just a little less overhang space between the bumpers and start of the wheel wells. Large 20-inch aluminum wheels are standard on the $41,500 3LT Traverse with mid-level trim, and they look good. The side view of the Traverse is also a departure, with a more angular look. Dual exhaust pipes add to this trim level and squared styling completes the look.

Driving the Traverse is also more rewarding than before. The ride is still one of the Traverse’s strengths; it soaks up bumps very well, and now it turns better with less lean. It’s more confidence-inspiring. One tradeoff with the stylish look is that the view outside for the driver suffers some.

The 2018 Traverse is a large machine, but it tends to drive smaller and lighter than before. It still takes a bit of seat time to feel comfortable in tight spaces, but overall it’s much easier than, say, a Tahoe.

There’s a new choice of two engines for 2018. For the first time, you can have a four-cylinder turbo engine or a V6 that’s all new and puts out more than 300 hp. I drove the FWD model, and it has tire-spinning power now. The Traverse also went on a diet, and that helps with fuel economy; I managed 22.8 mpg for the week, also an improvement over the old model.

It took Chevrolet a long time to redo the Traverse, but they really did a good job — the 2018 Traverse takes a huge leap forward. With improved styling and interior and pleasant ride, this large crossover is ready to be a family hauler with space most other midsize crossovers can’t touch.