WTOP car guy Mike Parris says the Audi is cracking the code of combining good looks with a spacious trunk for a hatchback with the 2017 Audi S7.
(1/7) 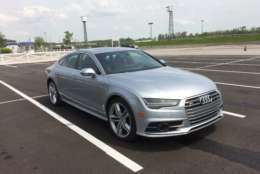 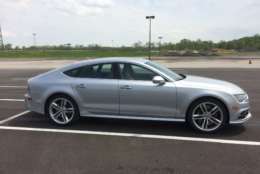 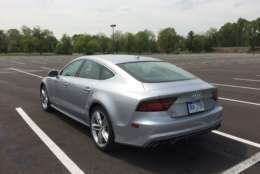 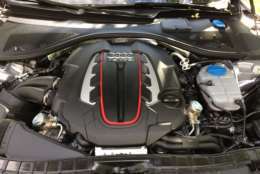 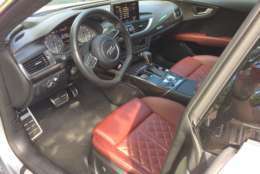 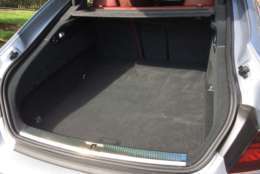 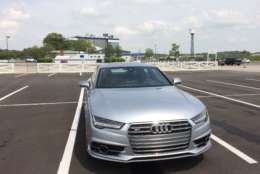 WASHINGTON — I know what you’re thinking: “hatchback” and “handsome” don’t really seem to go together in the same sentence. But Audi seems to crack the code of combining standout good looks with extra space for larger items in the trunk area.

Mercedes, BMW and even Porsche have jumped in the luxury performance hatchback game, but I see many more luxury hatchbacks from Audi in my daily commute.

I spent a week with the as-tested $91,000 Audi S7, which packs a 450 horsepower turbo V-8 that turns this normal, useful hatchback into sports car. The power comes on strong from low in the rev range, so there isn’t much waiting — just hit the gas and go, quickly. If 450 horsepower isn’t enough, Audi will sell you a RS7 Performance with 605 horsepower for $131,000.

Most buyers will be more than happy with S7 power, and the quattro AWD system helps put that power to the ground effectively. It also does a nice job of keeping grip on wet pavement and helps some with the handling of this large car. The ride is more euro firm than soft and floaty, but it’s never harsh on city streets; it just feels more in touch with the road. Large brakes have no trouble halting this car down from highway speeds and above. The fuel economy in a week of driving was 20.4 mpg of premium fuel — not that bad for a large performance hatch, but a little under the 21 mpg on the sticker.

Looks can go a long way in selling a car, and pulling off the hatchback isn’t always easy. Audi really gets it right with lines that mimic a two-door coupe more than a sedan. The S7 looks very sleek with a sloping roofline, especially toward the rear of the car; it seems to flow nicely. There is also a muscular look around the bulging wheel arches with larger, 20-inch S-design wheels that give it more of a sporty edge.

There is LED lighting for headlights and turn signals, so the light cluster seems nice and tidy and more sleek than I remember from the A7 I drove four or five years ago. And so you don’t forget that this is the S7, it’s equipped with slick quad exhaust tips sticking proudly out of the rear bumper, showing that this is no normal Audi.

While the looks are great outside, the interior is equally nice but you do have a bit of a penalty for that stylish body type. That sloped roofline impacts rear seat riders. Passengers over 5 feet 9 inches tall will find the headroom tight. At least there is good leg room for the two back seat riders, as this S7 only seats four people. The driver and front passenger have more headroom, and the seats are good for all-day driving.

My test car had the $1,250 Audi Design selection that added red seats and carbon red inlays on the dash trim, which gave the interior a pop. The headliner usually doesn’t stand out in most cars, but it does with this S7. The $3,000 Alcantara microfiber-like material looks and feels very nice.

The S7 isn’t the newest Audi in the lineup, so don’t expect the virtual cockpit that the recent refreshed models have. Still, the easy-to-read gauges are handsome and the NAV screen retracts out of sight when it’s not needed. The MMI Touch controller in the center console takes some time to get used to and it’s not quite good as the MMI controller in the newer Audis either.

Think of the Audi S7 as that all-around car that can be the comfortable daily driver or fun to drive on deserted twisty roads. Still, you can turn it into a cargo-hauling machine that can carry things that a normal sedan couldn’t. Plus, you can do that all in one car that stands out in the crowd. Just look for a 2017 Audi S7 and you might save few dollars, too.