The Kia Sedona Limited is doing its best to change the image of the minivan with a nicely outfitted interior with a few luxury items that even the popular crossovers don’t offer.
Listen now to WTOP News WTOP.com | Alexa | Google Home | WTOP App | 103.5 FM
(1/7) 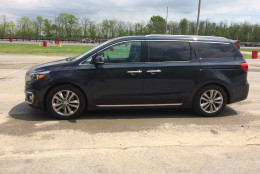 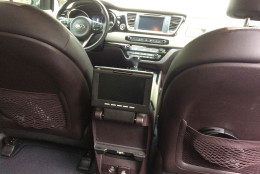 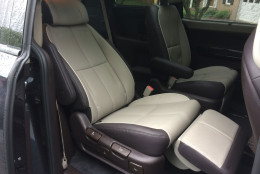 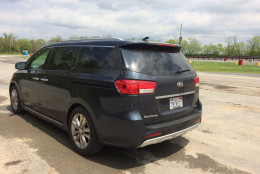 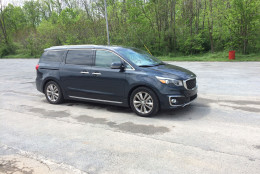 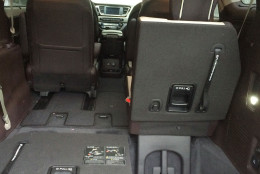 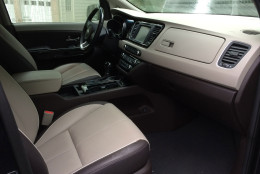 WASHINGTON — The word “minivan” can be a dirty one to some, but Kia is trying to turn around the image of the humble family machine by injecting some style.

Just a year after a complete redesign, the Kia Sedona sees a few upgrades, such as a rear vision camera on all trim levels, with prices starting at around $27,000. It’s a lot of vehicle, with room for up to eight people.

I took on the Kia Sedona SXL, the top-of-the-line trim level, for a week to see whether the minivan is on a rebound or more of the same old box on wheels.

The interior is a whole new ball game. The front seats and dash area look more like a crossover than the usual stark minivan. Those front seats are also heated and ventilated, and the Nappa leather is a nice quality. The two-tone color scheme looks sharp and further distances itself from the normal minivan design.

The rear seating area is also more upscale, as the middle row passengers have two first class-like lounge seats that are very comfortable on long trips. They look cool, but you can’t fold them or take them out, so you do lose some flexibility for moving large items. There is now a rear-seat entertainment system for $1,095. The screen isn’t very large, but it’s still a welcome addition for the 2016 model year.

Driving the Sedona is akin to a larger crossover from the seating position and feel. It’s wide and long, but after a few minutes you get used to it. The only engine is a 3.3L V6, with decent power for keeping up with traffic. It’s mostly quiet unless you are planting the pedal — then it’s noticeable, but not annoying.

The six-speed automatic masterfully shifts to the highest gear for better gas mileage and easy cruising. It has a remarkably hushed ride with no outside noises, a welcome plus for a minivan. It does fine as a normal commuter car and parking in tight spaces is aided by a nifty 360-degree camera system. The fuel economy isn’t horrible; I managed 21.2 mpg for the week — better than the 19 mpg combined the sticker says.

You can only do so much to spruce up the exterior of a minivan, but credit Kia for offering a bit of flash on the top-of-line Sedona. With larger 19-inch wheels and the use of some chrome-like trim pieces, this minivan has more of a visual appeal to the side view.

Even the front end looks more like a crossover than minivan, specifically the Kia Sorrento crossover. The rear-end styling is flashier, too, with a spoiler at the top of the rear hatch. The silver bumper insert helps the back look a little smaller than it really is.

Kia has been making a name for itself lately by offering premium vehicles at a reasonable price and it’s paying off with increased sales — not to mention recognition from J.D. Power and Consumer Reports for some of the popular new models.

The Kia Sedona Limited is doing its best to change the image of the minivan with a nicely outfitted interior with a few luxury items that even the popular crossovers don’t offer. This big Kia is setting the stage for a new breed of minivans, showing up with style and luxury at a price that’s less than a smaller crossover.

Editor’s note:  Mike Parris is a member of the Washington Automotive Press Association. The vehicles are provided by STI, FMI or Event Solutions for the purpose of this review.