The leader of a Southern Maryland volunteer fire department has earned a national honor for his efforts while responding to a deadly fire in Chesapeake Beach last year.
Listen now to WTOP News WTOP.com | Alexa | Google Home | WTOP App | 103.5 FM
(1/6) 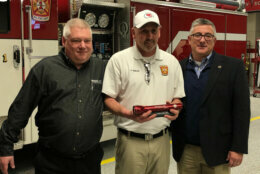 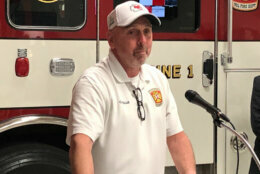 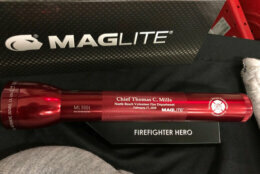 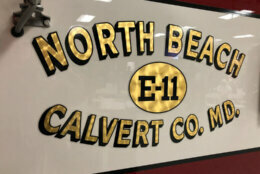 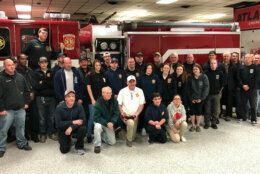 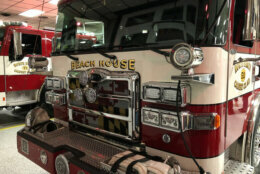 The leader of a Southern Maryland volunteer fire department has earned a national honor for his efforts while responding to a deadly fire in Chesapeake Beach last year.

On Thursday night, Chief Thomas Mills of the North Beach Volunteer Fire Department received a Firefighter Hero Award from the National Fallen Firefighters Foundation and Maglite for his efforts during the April 3, 2019 incident.

A fire ripped through a row of townhomes in the small town along the Chesapeake Bay, leaving two residents dead and eight firefighters hurt.

Two firefighters barely escaped death when a home they entered to search for potentially-trapped residents began to collapse.

One firefighter jumped out a window to save himself, but the location of a second was initially unknown.

“We hadn’t seen safety officer (Danny) Morrison, so we called for a mayday,” Mills said. “When the mayday was finished being called, he appeared at the front door, where he had fallen through the floor, and a couple other firefighters had walked up and grabbed him and pulled him out,” said Mills.

The cause of the fire was officially undetermined, but it’s believed that a cigarette or other smoking material thrown into mulch may have set it off. Then, thin wooden building materials and strong winds contributed to the flames.

“It was incredible. I’ve been in the fire department 30-plus years, and it’s probably one of the worst fires I’ve seen,” Mills said.

He was recognized Thursday for his leadership on the day of the fire and his effort to share lessons learned from the fire with other departments.

He thanked his family and his fellow firefighters.

“None of it would be possible without the men and women of the firehouse here,” Mills said. “I appreciate all of you and all that you do for us.”

His voice breaking, the chief closed his remarks saying, “I don’t have much else to say. I’m just – I’m humbled. I’m humbled.”

About half a dozen Firefighter Hero Awards are handed out across the country throughout the year. 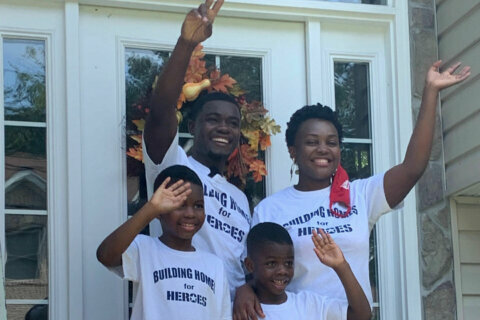