Last week, WTOP got a behind-the-scenes look at Calvert and the museum’s other otters, Chessie-Grace and Chumley.

The museum has an 8,000-gallon river otter aquarium and a separate otter holding area. In his section of the holding area, Calvert played with a towel, splashed in a pool and imitated a beachgoer by laying on his back with his webbed feet in the air.

“This guy is one year old or so, and he’s currently going through quarantine,” said David Moyer, curator of Estuarine Biology.

Calvert is also being treated for some tooth trouble.

“Once we’ve settled everything with his dental problems, then we will see about integrating him into the population with the other two,” Moyer added. “We don’t know how it’s going to go. There’s individual personalities in animals just as there are in people.”

He said the animals’ many fascinating features include eye lenses that automatically change shape underwater. This allows them to see just as well in the water as they do out of it.

The otters’ whiskers are special too, giving the animals a kind of sixth sense. “They can stick them out in front of their face in a very stiff fashion and use them to pick up vibrations in the water,” Moyer said.

Their fur, once sought after by fur traders, is incredibly dense: “It’s so thick that they have as many hairs in a square inch of their body as we have on our entire head, which is about 60 to 100,000 hairs.”

Their high metabolism means otters eat 15 to 20 percent of their body weight a day. At the museum, they’re fed mostly fish, but they also get treats of scallops and shrimp, and eat vegetables and fruits, too.

The “happy sounds” Chessie-Grace and Chumley made while waiting in a cage-like transition area for aquarist Lori Mason to feed them were a surprise: It was like a combination of a snuffling pig and a chirping bird.

When otters are not happy, they can hiss, growl and scream.

Moyer also said they’re constantly providing the otters with new things to investigate such as pine cones, feathers and logs.

“We give them scents and smells, whether its deer urine or vanilla bean extract. And we change these things up every day in their habitat so that they don’t get bored. Bored animals have a tendency to destroy their exhibits.”

Thanks to the generosity of donors and volunteers, there is a massive stack of towels for the otters, as well as a washer and dryer. The towels are used for the animals’ bedding and as playthings.

If you’d like to see the otters in person, the Calvert Marine Museum suggests visiting during feeding times from 9:30 a.m. to 10 a.m., 1 p.m. to 1:30 p.m. and 3:45 p.m. to 4:15 p.m. The museum is open daily except on Thanksgiving Day, Christmas Day and New Year’s Day. Read more about visiting from the museum’s website.

You can also watch the otters online through the museum’s River Otter Live Cam. 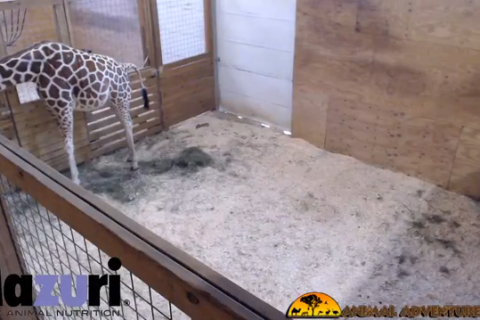